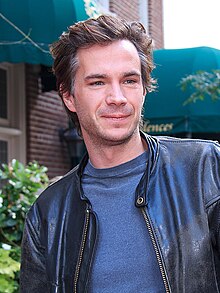 James D'Arcy was born Simon D'Arcy and grew up in Fulham, London . His mother Caroline was a nurse and his father died when he was young. He has a younger sister, Charlotte.

After graduating from Christ's Hospital in 1991, he did a volunteer year in Australia where he worked for the drama department at a school in Perth . This is how he got interested in acting. When he was back in his native London, he applied to various acting schools, from which the highly regarded London Academy of Music and Dramatic Art  - LAMDA for short - accepted him and where he attended a three-year course. He graduated in 1995 with a bachelor's degree in acting. During his time at LAMDA he took part in various projects such as Heracles , As You Like It , Wild Honey , The Freedom of the City and Sherlock Holmes . In 2012 he starred in the role of Anthony Perkins in the biography drama Hitchcock , which is based on the biography Alfred Hitchcock and the Making of Psycho by Stephen Rebello .

After the short film Chicken / Egg 2016, for which James D'Arcy was able to win over his fellow actors Hayley Atwell , Nikolaj Coster-Waldau , Huxley Davenport and Max Fowler, he presented his first full-length feature film as a director and screenwriter in 2020, Made in Italy . The main roles are played by Liam Neeson and his son Micheál Richardson.