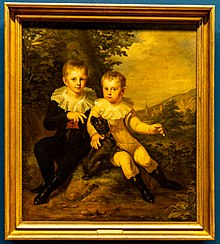 Johann Matthias completed his studies at the Westphalian Wilhelms University in Münster and, at the age of twenty, inherited the inheritance of his father, who died in May 1820. In his function as a chamberlain, he was responsible for the administration of the property. This was partly created by his great-grandfather (3rd generation) Johann Heinrich , but with the special support of his brother Prince-Bishop Christoph Bernhard . During his reign, Christoph Bernhard created considerable real estate assets. So in 1667 he bought the property from the impoverished lords of Dinklage. Four years later, all of Galen's possessions were combined in the Vechta office as entails . Six years later, in 1677, a small state-like structure emerged in the area of ​​today's town of Dinklage and the neighboring village of Brockdorf, the so-called Herrlichkeit Dinklage. The von Galen family, in their glory, had administrative sovereignty. She was also empowered to judge. She held this position for many years after the end of the Munster rule in 1803 . It was only ended when a contract was signed on March 17, 1826, which meant the end of glory for Dinklage. It bore the signatures of Johann Matthias and the Oldenburg government councilor Carl Friedrich Suden. The changes in the political and social conditions forced Johann Matthias to sell to the Grand Duke of Oldenburg . The following years were characterized by brisk buying and construction activities. In 1841 Johann Matthias began building the new St. Augustine chapel in the Dinklage castle complex. It was built in the Gothic Revival style and on 28 August 1844 by the Münster's bishop Vischering Kaspar Maximilian Droste consecrated . The inscription above the side door of the chapel: “I and my house want to serve the Lord. Jos XXIV, 15. Mathias von Galen and Anna von Ketteler his housewife built this church and celebrated the inauguration on the day of the patron saint of St. Augustine August 28th, 1844. “ commemorates this event. In 1846 he bought the Harderburg estate (near Osnabrück) from the Lodtmann family. In 1852 he donated the office building to the Clement Sisters in St. Anna-Stift in Dinklage, which served as a hospital and later became the basis of the St. Anna Foundation. In 1858 Matthias and his wife had the Assen house completely renovated and a neo-Gothic chapel built by the master builder Friedrich Wilhelm Buchholz. Bishop von Ketteler took over the blessing of the chapel.