Johannes Riemann on a photograph by Nicola Perscheid 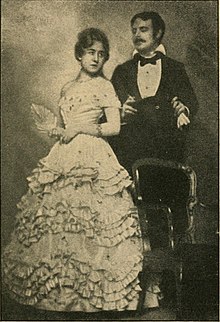 Else Eckersberg and Johannes Riemann in Franz Molnar's Carnival (1917)

After originally musical interests, Johannes Riemann took acting lessons from Anna von Strantz-Führing and Alexander Strakosch . In 1908 he got his first engagement at the Hebbel Theater in Berlin . Further stations in his theater career include Teplitz , Meran and Marienbad , the Berlin Volksbühne and the court theater in Weimar . Max Reinhardt brought him to the Deutsches Theater in Berlin around 1916.

The focus of his film activity is between 1916 and 1945. His first role was in the film Loosened Chains . In the Nazi state he became a member of the NSDAP . In 1939 he received the title of " State Actor ". During the Second World War he appeared on a trip to occupied Poland at the end of March 1944 as part of a troop support event for concentration camp personnel during a colorful evening in Auschwitz .

After the Second World War he was back on stage more often.