The title of this article is ambiguous. For more meanings, see John Doe (disambiguation) . 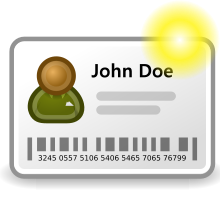 John Doe as a placeholder name

John Doe , female counterpart : Jane Doe , is an English wildcard name for fictional or unidentified people. John is one of the most common English male names. "Doe" means a doe . The term is mostly used in the United States .

In the entire Anglo-American legal area, John Doe designates a fictitious litigation party or another fictitious participant in the process, as well as the fictitious name of an existing but unidentified litigation party. Other terms are also used for this purpose, e.g. B. Richard Roe , John Stiles , Richard Miles etc. The best known case of the use of the feminine form is probably the abortion judgment Roe v. Wade , in which the applicant Norma McCorvey appeared under the pseudonym Jane Roe .

The term has also found its way into common usage as a term for a fictitious or unidentified person. In this respect it means:

Another field in which it is important to maintain anonymity can be found in the (US) adult industry in the broadest sense. Men in bars, brothels, clubs or on the phone often introduce themselves as John or John Doe, in order to signal an interest in a discreet business.

The term John Doe was used by English courts at the latest from the 17th century to designate fictitious parties in the context of the so-called action of ejectment . There are also other names such as B. Richard Roe ( English Roe : Reh), John Stiles , Richard Miles etc. Why these names were used is not known. But it can be assumed that the frequency of the name John played a role.

With the action of ejectment property rights to land could be enforced in England up to the Common Law Procedure Act 1852 .

Common law originally only allowed an action if it could be assigned to a certain form of action, a writ . The correct form of action for enforcing property rights to property was actually the writ of right , which clarified the question of property rights once and for all. However, the lawsuit brought by writ of right was so complex that a replacement was sought. This was the action of ejectment .

The basis of the action of ejectment was the writ of trespass de ejectione firmae . Originally serving action of ejectment only the protection of tenants ( lessees ) . Its purpose was to evict someone from the property who had no right to property in relation to the tenant.

The action had to be dismissed, of course, if the defendant could prove that he himself was the tenant of the property and that his lessor had a better right to the property than the plaintiff's lessor. So the success of the lawsuit ultimately depended on which lessor was the real owner of the property.

This was used in the 16th and 17th centuries to circumvent the difficulties of the writ of right . Whoever wanted to clarify the ownership structure (A) leased the property to a friend (D). The latter took possession of the property and was evicted by him - either by the person claiming the property for himself (B), or by another friend of A, the casual ejector or ouster , who, as the alleged tenant of B, specifically instructs B to do so became (R).

The alleged tenant of A (D) now raised the action of ejectment against the person who had driven him away. If this was the casual ejector (R), it now informed the B and advised him to join the process in order to defend his supposed property, the message often being ironically signed with " your loving friend ".

1656 is to roll CJ be passed to require B, all the requirements of the application, lease ( lease ) , possession ( entry ) and displacement ( ouster ) , except for the ownership of the A ( title ) to concede before this accession allows the procedure has been. As a result, these requirements became pure fiction. Neither the leases, nor the occupation, nor evictions actually took place. The fictitious plaintiff tenant was referred to as John Doe , the fictitious defendant tenant ( casual ejector ) as Richard Roe .

From England and Wales the use of fictitious, i.e. actually nonexistent parties after 1852 is not known. In a few cases, the term John Doe has been used to denote an existing but unidentified party (mainly the defendant) ( Barnett v French [1981] 1 WLR 848 (DC) with further references).

The use of the party name John Doe and Richard Roe is still in use in the United States judicial system today.

In numerous US crime and hospital series, unidentified suspects or murder or accident victims are referred to as "Jane Doe" or "John Doe". This also corresponds to the usual practice in the police and clinics.