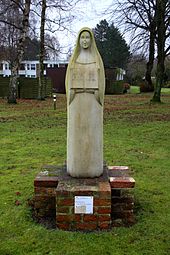 Mary statue in memory of the former monastery.

The monastery Marienthal ( Vallis sanctae Mariae ) is a former convent of Benedictine in the city north in East Friesland . Eggerik Beninga ascribes its foundation in the Cronica der Fresen (16th century) to Saint Hatebrand († 1198), abbot of the Feldwerd monastery in Groningerland, which has not yet been confirmed. It was consecrated to Mary . During the Middle Ages, Marienthal was the house monastery of the Cirksena , who were buried there from 1464 to 1548. After the Reformation the monastery existed until 1555. The buildings were then demolished. Today it is replaced by a workers' welfare home for the elderly.

The exact date of foundation is unknown. The name of the monastery goes back to its patron saint and the location of the settlement in a depression on what was then the northern outskirts of the city. Archaeological finds show that the site was used before 1200. It is still unclear whether this was related to the monastery. It is certain that the site was used for agricultural purposes in pre-monastery times.

Later Marienthal was in contrast to the younger, 1264 founded the Dominican monastery on Fräuleinshof , dat olde cloester called. Marienthal belonged with other branches of the Benedictine order to a monastery association, which possibly goes back to the Holy Hatebrand († 1198). He was abbot of the Feldwirth monastery near Appingedam , which is considered the mother monastery of the East Frisian Benedictine monasteries. Marienthal was, like the other early settlements of the order in East Friesland, a double monastery. At the head was an abbot ; the nuns' department was headed by a prioress .

In 1220 an Abbas de Norda is mentioned in a document , but he is referred to as belonging to the diocese of Münster , while Norden belonged to the diocese of Bremen . The first reliable mention can be found in a contract from 1255. Abbot at that time was a certain Winandus . He is named in the document as a first-rate witness, which speaks for the importance of the Convention. His successors also retained their role as a distinguished representative of the Norderland. The great wealth of the monastery, which has been handed down historically, has been proven by extensive finds. The Benedictines had their settlement surrounded by a wall. The northern part of the encirclement has been preserved and the western street is still called Am Zingel today .

From 1347 to 1353 in Europe was raging plague a third of what was then Europe's population - -, the estimated 25 million people fell victim. The epidemic reached East Frisia via Utrecht , spread through the port cities and decimated the population. The monasteries were also affected. According to medieval reports, 50 people were killed by the epidemic in the Langen monastery . According to the chronicler Eggerik Beninga, Marienthal was also hit by the disease. According to the understanding of the spread of diseases at the time, the residents of Marienthal completely rebuilt some buildings in order to become their master.

In 1420 the monastery took in Benedictine monks from Marienkamp monastery and in 1444 some of the nuns from Sielmönken monastery after the local convents had been converted into Augustinian canons.

The monastery was held in high regard. His abbots and probes are mentioned several times in a prominent place in witness lists. From the 15th century until the secularization of the monastery in 1529, it served as the home monastery of the later count and princely family of Cirksena . She had her burial there - like other noble families in the Norderland - from 1464 to 1548 and housed her unmarried daughters in Marienthal. From then on, the Abbots of Marienthal appeared several times in leading positions as witnesses for the Cirksena. Possibly they were even advice and close confidante of the sex. For example, Abbot Poppo signed the document on May 20, 1436, with which Edzard Cirksena took over the rule of the Norderland. Poppo appears again on April 28, 1440 as the first witness in a document in which Wibet von Stedesdorf renounces Esens in favor of Ulrich.

This special position of the Marienthal monastery ended abruptly with the beginning of the Reformation , which moved to the north around 1527. Gerardus Synellius was the last abbot. He was introduced to his office in 1512 and was the only clergyman defending the old faith on January 1, 1527 at the Northern Disputation . Synellius probably left the Marienthal monastery in the same year, but stayed in Norden until his death in 1552, so apparently he did not resist the Reformation any further. In 1542 he was still on a mission with Count Johann II on behalf of Countess Anna . Ubbo Emmius called him a man of the highest learning and an ornament of Friesland . This judgment is confirmed by his only surviving work, a Latin prayer and devotional book published in 1525. Synellius wrote it in classical poetry in the tradition of the Devotio moderna and dedicated it to the Emden provost Hicco von Dornum.

With the death of Edzard I and his burial in the abbey, Marienthal's function as a house and family monastery of the Cirksena ends. In 1530, 120 inmates are said to have lived in Marienthal, of whom the prioress and many other convent members moved to the still Catholic Groningen during this time and were accepted there in the Selwerd monastery.

In 1531 Balthasar von Esens plundered the monastery and destroyed the burial place of Cirksena. The monastery existed until about 1555. In that year there was still a monk and a nun living in Marienthal who felt they were subordinate to the Thedinga monastery . In 1548 Countess Anna had the crypt of the counts in East Friesland laid out in the Great Church in Emden and the Cirksena, who was buried in Marienthal, moved there.

In the course of the Reformation, the Marienthal monastery was secularized . In 1557 the buildings were torn down and their stones were used to build the Zwinger in Aurich. For the demolition of the monastery church, the foundations were deliberately undermined, similar to the one in Ihlow , so that they could collapse towards the south. This was to avoid damaging the northern cloister.

A poor inn or inn was built on the site of the monastery. This was provided with part of the income of the former monastery. Other income went to the previous institution of today's Ulrichsgymnasium . The land ownership fell to the East Frisian Princely House and can still be found today for the most part in the state domains. According to the last remaining nuns, the archive was moved abroad at the request of the deceased abbot. Since then, there has been no trace of him or of the library. Today there is a workers' welfare home for the elderly on the site of the monastery .

The monks probably built the first buildings of the monastery out of wood. In the 13th century, the monastery was expanded considerably and a new church was probably built at this time. During excavations it could be proven that bells were cast in Marienthal. This is unique to date for a deserted monastery in East Friesland. In comparison with a similarly decorated bell in Dornum, the shape used in Marienthal is dated to the Romanesque period . According to Ubbo Emmius , Marienthal is said to have been the most beautiful monastery between the Weser and Ems in the 13th century.

It must have been very dilapidated around 1400, because the monastery was given an indulgence so that it and other buildings could be repaired. The new construction of the monastery church is dated to the second half of the 15th century. It was probably wider than its predecessor. Possibly their establishment was in connection with the Cirksena , who set up their hereditary burial there. The monastery probably had an enclosure . This is what today's street name Am Zingel suggests. After the Reformation, the buildings fell into disrepair and in 1556 parts of the monastery were demolished. The building materials obtained in this way were put to a new use in the construction of the Zwinger in Aurich.

With the dissolution of the monastery during the Reformation, large parts of the furnishings were lost. Count Enno II appropriated most of the convent's possessions. In 1530 he had all the Vasa sacra, i.e. silver and gold-plated goblets, godparents, monstrances, communion jugs and other valuable items from all East Frisian monasteries handed over and then sold them. Only the choir stalls of the monastery were probably preserved. Today it is located on both sides of the high choir of the Ludgeri Church . It was built in 1481. After the Reformation it was probably moved to the Ludgerikirche, but had to be shortened before it was installed. The remaining seats are in the ambulatory. The eastern side cheeks of the northern row of chairs are decorated with the crucifixion of Jesus; The Annunciation of the Angel Gabriel to Mary can be seen on the southern row of chairs . The hand knobs between the rows of chairs show plant motifs and a human head.