Lewisham [ luː.ɪʃəm ] is a district of London District London Borough of Lewisham . It's north of Catford . In the east the district borders on Lee and in the west on Brockley . To the north it is bounded by Deptford and Greenwich .

The story of Lewisham goes as far back as the 6th century, when the Jute Leof settled here. The current name is derived from its name and the old English word Ham for village. According to the Domesday Book , around the year 1100 there were numerous mills in today's urban area, in which steel was ground, leather was tanned and grain was ground. Lewisham's character changed in the 17th century when it was used more and more as a residential area. On September 5, 1711 William Legge, 1st Earl of Dartmouth was raised to Viscount Lewisham .

On July 28, 1944, the main street of the district was hit by a V1 cruise missile. The air strike destroyed large parts of the city center and claimed 300 lives. Today a memorial stone on the outside of Lewisham's shopping center commemorates the attack. It took until the 1950s for the city center to be rebuilt. In 1977 the district received increased media attention because of the so-called Battle of Lewisham . More than 10,000 citizens protested a British National Front march .

With increasing size Lewisham was connected to the local public transport by the North Kent Line opened in 1849 . In addition, various tram lines were created. Lewisham Station, which still exists today, was opened in 1857. From here, Southeastern trains connect the district with Charing Cross and London Bridge stations in the city center. Trains run east to Dartford . Since 1999 there has also been a connection to the Docklands Light Railway , which connects Lewisham with Bank , Canary Wharf and Stratford stations . The bus station provides a connection to the London Buses network and the national long-distance bus network. In 1957, the Lewisham railway accident, with 90 deaths and 173 injuries, went down in history as one of the worst rail accidents in Great Britain in the 20th century.

Lewisham was under the Lewisham District Board of Works Authority until 1900 . With the London Government Act 1899 , the Metropolitan Borough of Lewisham was created. This existed until 1965. Since the passage of the London Government Act 1963 , the district has been part of the London Borough of Lewisham . In the House of Commons , Lewisham belongs to the Lewisham Deptford constituency which is represented by Joan Mary Ruddock . Within the London Assembly , the district belongs to the constituency of Greenwich and Lewisham whose MP Len Duvall is a member of the Labor Party . 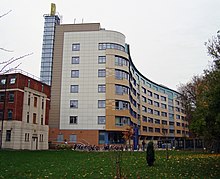 The Lewisham industrial estate is one of the largest in south east London. The Lewisham Shopping Center opened in 1975 and houses around 70 shops on 30,700 square meters . The University Hospital Lewisham has existed since 1894 . The hospital serves patients throughout the Borough of Lewisham. In July 2012, the closure of the emergency room was discussed. After considerable protests by Lewisham residents and various court rulings, the plan was abandoned. There are several reformed upper level schools in the city . Furthermore, we find that in Lewisham Goldsmiths College , which the University of London is one and at the Trinity College of Music belonging Laban College . The Lewishams police station, which opened in 2004, is considered the largest police station in Europe. It has 96 cells and 24 horse stalls .

The Lewisham Cricket Club was one of the most respected teams in the Victorian era . In addition, the members of the Lewisham Swimming Club were active in water polo for the English national team. In 2013 a new leisure center opened.

Lewisham has been a twin part of the West Berlin district of Charlottenburg since 1968 .