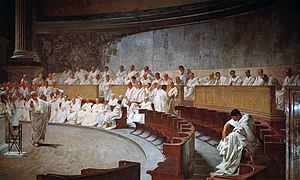 Lucius Sergius Catilina (* probably 108 BC ; † 62 BC ) was a Roman politician. He is best known for the attempted coup, known as the Catiline Conspiracy , with which he was in 63 BC. Wanted to seize power in the Roman Republic . The background and course of this conspiracy are passed down particularly through Cicero's speeches against Catilina and through Sallust's historical work De coniuratione Catilinae .

Cicero's speech to the Senate on November 7, 63 BC. The phrase used "How much longer , Catiline, will you abuse our patience?" ( Quo usque tandem abutere, Catilina, patientia nostra? ) Still appears in political discussions today.

Lucius Sergius Catilina came from the patrician family of the Sergians , who claimed that their origins go back to the beginnings of Rome. The progenitor Sergestus was supposedly one of the companions of Aeneas , who fled to Italy after the fall of Troy. The patrician family of Sergians had had little political influence for some time, but stood out among the influential Roman families due to the military merits of some family members. One of the most famous ancestors of Catiline was Marcus Sergius Silus , who fought against Hannibal in the Second Punic War and who is considered to be the first man to take part in a war while wearing a prosthetic hand.

His wife Gratiana was the sister of Marcus Marius Gratidianus . He was related by marriage to Gaius Marius and Marcus Tullius Cicero .

His first appearance as a member of a consilium of the consul Gnaeus Pompeius Strabo falls in the year 89 BC. Chr .; This consilium decided to grant Roman citizenship to a Spanish tower because of outstanding bravery. During this time Catiline could have held the post of tribune or prefect ; In any case, he must have possessed a certain, perhaps not insignificant, degree of military ability.

After Sulla returned from the war against Mithridates in 83 BC. BC Catiline and his maternal uncle took his side, as he probably expected him to be the greatest advantage for his future career.

82 BC He is said to have killed his brother and justified the murder by subsequently having the brother entered in the proscription lists. In the same context, he is also accused of desecrating his virgin daughter. How far this news can be believed, however, is doubtful.

Later he received an order from Sulla to torture and kill his brother-in-law Marcus Marius Gratidianus because he was related to Gaius Marius . The fact that Marius Gratidianus was his wife's brother did not seem to have stopped him from carrying it out. Some authors report that Catiline brought the victim's head, severed by hand, to Sulla in the Temple of Apollo and washed her bloody hands in the holy water there. As a legate , he was involved in the conquest of Praeneste by Sullan troops in the same year and subsequently emerged as a committed persecutor of those proclaimed by Sulla. His sister's husband, a certain Quintus Caecilius , was one of his victims .

Cicero and Sallust attest Catiline a dissolute way of life, which resulted in high debts after the fortune he had acquired under Sulla was squashed, but this can certainly be a tendentious assertion that had the purpose of further disparaging Catiline. It is well known that the cursus honorum strained the private coffers of everyone who aspired to or held an office; At this point we only refer to Caesar , who filled his coffers with the spoils of war from Gaul .

In 73 BC Catiline was accused by Clodius of fornication with a vestal virgin, but probably acquitted due to the intervention of the former consul Quintus Lutatius Catulus and bribery of the judges (probably by Caesar and Crassus).

Lieutenancy in the province of Africa

After his praetur in 67 BC BC Catiline went pro praetore to the province of Africa , which he probably exploited a little more thoroughly than was customary for governors anyway. 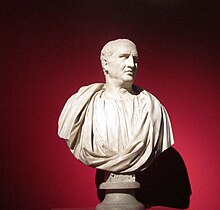 Bust of Cicero in the Capitoline Museums , Rome

Catilina's ambitions to achieve the office of consul and thus the most influential political office in Rome were confirmed by a repetition procedure in the years 65/64 BC. And from the resistance of his opponent Marcus Tullius Cicero in the consulate elections in 63 BC. Thrown back. Catiline was heavily indebted after the lost consulate elections. An attempted coup in which he tried to unite the poorest of Rome behind him failed, he was declared an enemy of the state and fled Rome with his troops. In 62 BC He was finally killed in the Battle of Pistoria when he threw himself into the fray in the face of defeat.

For Roman historians dealing with civil disobedience and insurrection throughout Roman history, the Catiline case was the prime example to which they resorted, even if it represented a reversal of the chronological order. Titus Livius, for example, describes with his Marcus Manlius a Roman nobleman from early Roman history who allied himself with the Roman mob and instigated a doomed revolution. From the point of view of ancient historian Mary Beard , this is a projection of Livy 's Catilinarian conspiracy onto the early Roman period.

Various authors have dealt with the figure of Catiline over the centuries. It was interpreted both negatively and positively, depending on the political attitude of the author: Ben Jonson , who was employed at the English court, published Catiline His Conspiracy in 1611. Catiline is the state shaker to be fought, his opponent, Marcus Tullius Cicero, is the shining savior of the fatherland. Ferdinand Kürnberger interpreted the material in a completely different way in 1855. The revolutionary Kürnberger sees Catilina as a social revolutionary who wants to break up the rotten, rigid order. Even with Henrik Ibsen encountered in his first drama Catiline (1849), a not entirely negative Catiline.

Due to the mostly negative interpretation of the Catilina figure, Catilina is rarely used today as a namesake, unlike other well-known ancient personalities. Exceptions are the Residenze Torre di Catilina , a hotel complex in Pistoia, in the place where the historical Catilina was killed, and the German-speaking provider for online Latin courses Schola Latina Catilina .