The MV yards Rostock GmbH ( Warnow Werft ) in Rostock-Warnemünde is a shipyard of the group MV shipyards .

In the course of the economic reforms in the transition times in the GDR , the VEB Warnowwerft Warnemünde was transferred to a corporation on June 1, 1990 and was now called Warnowwerft Warnemünde GmbH . On October 1, 1992 the Treuhandanstalt sold the Warnowwerft to the Norwegian Kvaerner ASA , the company name (company) was changed to Kvaerner Warnow Werft GmbH . The Kvaerner Group invested almost 400 million US dollars in the years 1993–1995 to modernize the shipyard. For the restructuring of the Warnemünde shipyard, Kvaerner received a billion DM in subsidies between 1992 and 1995 .

The last conventional launch took place on June 30, 1995. The Warnow was completely closed to shipping in the area of ​​the cable crane system. Nearly two months later, on August 1, 1995, the keel laying of the first found container ship of the type WARNOW CV 2600 held at the newly completed building dock. As forty years earlier, the ship was commissioned by Deutsche Seereederei GmbH. Thus this keel laying also had a symbolic character.

Another major event took place on January 13, 2000: the delivery of the largest container ship ever built in Germany, the P&O Nedlloyd Tasman . In 2001, the shipyard's shipbuilders demonstrated that they are not only capable of building ships, but also drilling rigs. The Stena Don drilling rig is delivered and at the same time marks the 400th construction of the shipyard since it was founded in 1946. 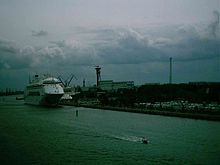 Kvaerner on the west bank 2003

However, 2001 was not a good year. In September, the Norwegian parent company - Kvaerner ASA - stated that it had maneuvered itself into financial difficulties by taking over the British plant manufacturer Trafalgar House . New investors are being sought. On February 4, 2002, the Kvaerner ASA and Aker RGI (Norwegian conglomerate around the billionaire Kjell Inge Röke) announced that they would merge their shipbuilding activities worldwide. The Aker Kvaerner Yards AS arises. In mid-2003 Aker RGI took over all shares in Kvaerner. Since the integration of the Kvaerner Group into the existing Aker Yards group of companies (2002), the former Kvaerner Warnow Werft Rostock GmbH and Aker MTW Werft have been cooperating under the name Aker Ostsee . Under this roof, the Warnowwerft now operated as Aker Warnow Werft GmbH .

In 2008 Aker Yards sold a 70 percent stake in the Russian financial investor FLC West . The transaction took effect retrospectively on January 1, 2008, and from September 22, the shipyards operated as Wadan Yards .

On June 5, 2009, the German parts of the Wadan Yards Group AS , including Wadan Yards Warnow GmbH in Warnemünde, filed for insolvency . In mid-August 2009, the insolvency administrator was able to present an investor who also took over the Warnemünde shipyard. The head of the Moscow North Stream office Vitaly Yusufov (Russian: Виталий Юсуфов, English transcription: Vitaly Yusufov), son of the former Russian energy minister and Gazprom supervisory board member Igor Yusufov (Игорь Юсуфов, Igor Yusufov) acquired for approx. 40.5 million euros The assets of the German Wadan parts of the company through the Nordic Yards established by him . The insolvent Wadan Yards was after the sale of all assets a legal shell over which the Wadan creditors were compensated.

In March 2016 the Malaysian-Chinese shipping company Genting Hong Kong acquired the Nordic Yards for a purchase price of 230.6 million euros; the shipyard in Warnemünde was valued at 90.8 million euros. Together with the Lloyd Werft Bremerhaven , the shipyards in Wismar, Warnemünde and Stralsund were to operate under the name “Lloyd Werft Group” and manufacture cruise ships. In July 2016, however, it became known that the shipyard in Warnemünde would instead be incorporated into the MV Werften group of companies .

On March 20, 2020, the production of the current shipbuilding projects was suspended and the shipyard temporarily, this was justified by the operational restrictions due to the COVID-19 pandemic . The North German Radio reported that the shipyard group problems would have it, accounts for the second cruise ship in the Global class and the resulting in Stralsund expedition yacht Crystal Endeavor to settle; MV Werften had contacted KfW and applied for liquidity assistance from the special Corona program.

So far, more than 450 ships have been built at the shipyard.