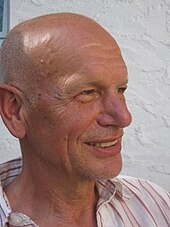 Manfred Berger, who grew up in a large family in the Neuaubing colony and in Hasenbergl , first learned the profession of high voltage electrician after completing elementary school in Neuaubing on Limesstrasse and Oselschule in Pasing.

After a few years of work, he attended from 1966 to 1969 the technical school for youth and home education (today: Catholic Academy for Social Pedagogy Munich ) and then the higher technical college for social education in structure (today: Catholic Foundation University of Applied Sciences Munich ). After that, Berger worked for several years as an educator in a special educational children's home in Dachau , the Amalie-Nacken Children's Home . He also completed training as a curative teacher and supervisor . 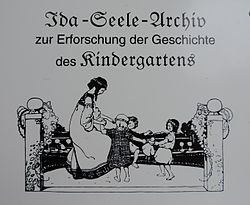 Logo of the Ida-Seele archive

From 1978 to 1983 Berger studied psychology, education, sociology and pre-school education (among others with Rolf Oerter and Ilse Lichtenstein-Rother ) at the University of Augsburg .

From 1976 to 2010, Berger taught pedagogy, psychology, children's and youth literature, curative education, rhythm, the history of social work and curative education at various universities of applied sciences and technical schools for social education. Today Berger works as a supervisor in the pre-school sector and as a speaker on historical and current topics in pre-school education.

Berger, married since 1971 and the father of two children, is co-author of the Biographical-Bibliographical Church Lexicon and the manual for educators in crèches and kindergartens. Daycare and after-school care . He has now published over 1,000 articles that have appeared in specialist journals such as Our Youth , Theory and Practice of Social Pedagogy , Contributions to Youth Literature and Media , the Magazine for Experiential Pedagogy , Forum Women and Society , Social Magazine , Our Children and heilpaedagogik.de . A considerable part of his scientific contributions deal with the history of the kindergarten and Friedrich Fröbel , who "donated" the kindergarten in the town hall of Bad Blankenburg in 1840 . Another focus of Berger includes the area of ​​children's and youth literature as well as dealing with the achievements of women / men in early childhood education, curative education and social work.

In 1993, Berger founded an archive named after the first Froebel kindergarten teacher Ida Seele to research the history of kindergarten and social work, including related sciences.

In addition to his commitment to Froebel and kindergarten Berger is a renowned avenues friend and connoisseurs.

Manfred Berger during a lecture on the history of home education (September 17, 2019) at the Dillingen University of Applied Sciences