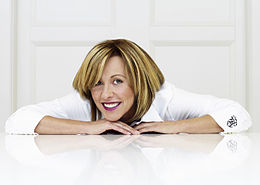 Schreinemakers studied journalism and social sciences in Bochum and Bonn . After completing her studies, she began working as a reporter for the news desk of the WDR , where in 1984 she also hosted the broadcast current hour . Her breakthrough came in 1985 as co-host of the program Extratour of Radio Bremen . From 1987 to 1988 she hosted the quiz show Wortschätze on Erste , which according to the television dictionary "Schreinermakers [sic] is said to have earned the reputation of a completely disinhibited kindergarten aunt " and was only broadcast nine times, and in 1989 the comedy show Chicita , which was canceled after three programs. From 1988 to 1991 she co- hosted 42 programs on the NDR Talk Show .

In 1992 Schreinemakers switched to the private broadcaster Sat 1 , where she got her own talk show Schreinemakers Live . The show was one of the programs with the highest ratings of its time and was awarded numerous prizes, including Bambi and the Golden Camera . During her maternity leave she was temporarily represented by Jörg Wontorra in 1996 . Even Reinhold Beckmann she represented once in a sick leave. In 1996 the press wrote that she was being investigated on suspicion of tax evasion. Schreinemakers suspected that it was an act of revenge by the then Federal Minister of Finance Theo Waigel , as she had his former wife appear on the show shortly before and report on the divorce from Waigel. Since she came under increasing pressure in public, she announced that she would comment on her broadcast. However, the broadcaster refused and requested a written declaration of discontinuance. He also threatened to cancel the broadcast if necessary. When she wanted to comment on it live on August 22nd of the same year during her broadcast, Sat 1 broke - for the second time in German television history (in 1986, Bayerischer Rundfunk had hidden an episode of the ARD broadcast windshield wiper with Dieter Hildebrandt ) - the current live -Shipment actually started while the post was starting. Instead, moderator Ulrich Meyer read a statement from Sat 1, according to which it is not compatible with journalistic principles to address private problems in one's own program. The cooperation with the broadcaster continued until the end of 1996. The investigation was discontinued in 1998. Various press reports claimed that this was done in return for a payment of one million marks to charitable institutions. Schreinemakers dismissed this as false reporting. According to her statement, the criminal tax proceedings were “innocently discontinued” and she was awarded a million by the German state. During an interview with Jenke von Wilmsdorff on the show Jenke - I stay overnight , she again explicitly commented on the matter in 2014 and insisted that her statement was true.

In 1997 Schreinemakers switched to RTL , where she continued her show under the title Schreinemakers TV for a year, slightly changed, but was unable to build on the previous successes. After the show ended, she hosted the program Ein Herz für Kinder in Erste and finally the Big Diet format on RTL II . Both shows were unable to match the ratings of their previous shows. Schreinemakers quit Big Diet after three episodes with the following reason: "The cooperation between those involved has shown that the respective program ideas are too far apart to be realized together." After a long break that followed, Schreinemakers returned in 2004 with the ARD talk magazine Schreinemakers back on television. This format could not tie in with the ratings from Schreinemakers Live , but ran for 32 episodes. Then Schreinemakers took a break. In 2007 Schreinemakers took part in the second season of the RTL show Let's Dance , but dropped out in the third episode. In 2008 she finally presented the interactive program Schreinemakers 01805-100232 on 9Live within the entertainment and information area of nine TV . After four months, she ended her collaboration with 9Live because the audience ratings were worse than expected.

On March 1, 2009, Schreinemakers suffered cardiac arrest while jogging , but was resuscitated by her partner . Since then she has largely withdrawn from the public eye and married her partner in 2012. From 1986 to 1988 she was married to the presenter Jürgen von der Lippe . In 2007 she divorced her second husband, with whom she has two sons.

Schreinemakers lives in Eupen in East Belgium and works as a furniture designer under the Crazy Art Deco label .