Matthew Lewis at the premiere of Harry Potter and the Deathly Hallows: Part 2 in New York (2011)

Matthew "Matt" David Lewis (born June 27, 1989 in Leeds , West Yorkshire ) is a British actor . He was best known for portraying Neville Longbottom in the film adaptations of the Harry Potter novels. 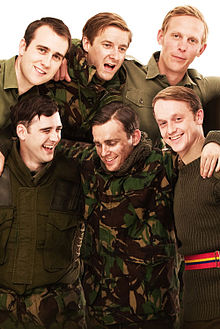 Starring in the West End revival of Our Boys (Jonathan Lewis), 2012

Lewis attended St Marys School Menston Catholic School. He is 1.83 meters tall and a supporter of Leeds United football club . One of his two brothers, Anthony Lewis, is also an actor. Lewis has been in front of the camera since he was five years old. He finally gained notoriety in 2001 when he starred as Neville Longbottom in the film adaptation of the novel Harry Potter and the Philosopher's Stone . He embodied the role in all subsequent sequels until 2011.

Shortly before the release of Harry Potter and the Deathly Hallows: Part 1 , Lewis was a reporter in the independent film The Sweet Shop in front of the camera. This was followed shortly after by the five-part television series The Syndicate , which first aired on BBC One in spring 2012 . In July 2012, Lewis starred in A Band of Buriers music video in which he played a couple with actress Lily Loveless . In April 2013, the film Wasteland was shown at the Newport Beach Film Festival , in which Matthew Lewis was seen as Dodd . The film was released in the UK under the name The Rise .

Lewis has also appeared in several theater productions since 2006. He finally made his West End debut in September 2012 with the re-production of Jonathan Lewis' Our Boys , a drama set in a British military hospital in the spring of 1984. Matthew Lewis took over in the role of Mick, with him standing among other Arthur Darvill ( Broadchurch ; Doctor Who 's Rory ) and Parry on stage. Laurence Fox ( WE ; Lewis ) played the main character, Joe, who was severely traumatized after the bombing in Hyde Park and Regent's Park .

Matthew Lewis is the Vice President of the Leeds Rugby Foundation Charity.

He has lived in London since 2015. On May 28, 2018, he announced that he had married his longtime girlfriend, Angela Jones.