Mehltheuer is a part of the Saxon community of Hirschstein in the district of Meißen .

View of the entrance to Mehltheuer on Bundesstraße 6 : on the right the former station building.

In Barmenitz springing Mehltheuer Bach tangent to the village in the West and part of the river system of Jahna is. Mehltheuer is naturally located in the northern Saxon plateau and hill country and gives the Mehltheuer-Stauchitzer Platte its name.

The location is divided into the actual center with Dorfstrasse and church as well as a settlement along the federal road 6 (B 6) and around the former Prausitz station on the disused Riesa – Nossen railway line , which is east of the local area in a north-south direction and there also crosses the federal highway at ground level. The federal road follows the course of the old post road between the cities of Riesa, Meißen and Oschatz . In Mehltheuer, state road 85 branches off from the B 6 in the direction of Lommatzsch. There are connections to the surrounding villages via county roads .

Mehltheuer is connected to the bus network of the Meißen transport company .

The place emerged as a square village and was first mentioned in 1222 as Nuendorph . The village belonged to the Meißischen burgraves and the Staucha monastery . After the Reformation , the manor and jurisdiction were transferred to the Jahnishausen manor .

Today's church in Mehltheuer was built from 1744 to 1746 in the baroque style and consecrated in 1747. Johann Ernst Hähnel's organ was installed on July 6, 1755 at a total cost of 660 thalers. The previous building of the church was a branch church of the Striegnitz church, was first mentioned in 1205 and probably founded by a castle warden named Nimuncow (never flour), who worked for the burgrave Heinrich I of Meissen at the end of the 11th century . The later place name will have been derived from this, as the village was first called Meltewer in 1424 . A collegiate school, which was the first school building in Mehltheuer, had been located near the church since 1716.

In the Electorate of Saxony , Mehltheuer was administered from the Meißen district office .

Until 1779, traders who wanted to go to the annual markets in Riesa stopped the day before in Mehltheuer and offered their goods in the town that was actually much too small for a market. Because the Jahnishausener manor did not have a permit to hold markets, the markets in Mehltheuer were officially banned. At that time, 32 lived obsessed husband and nine cottagers in Mehltheuer, the 28 1 / 4  hooves farmed each with 12 bushels.

Oberreit'scher Atlas from 1839/40: Mehltheuer with the surrounding towns and the Poststrasse

In 1877 the Riesa – Nossen railway line was built, which brought Mehltheuer via the Prausitz station ( ⊙ ) directly to the municipal border with direct access to rail passenger and freight traffic. For the construction of the train station and in order to cross the current main road as at right angles as possible, this was relocated in the intersection area, so that since then a distinctive 90-degree curve has to be passed before entering the town when coming from Meißen. Since then, Lommatzscher Strasse (today's State Road 85 ) has been flowing into the federal road at an acute angle at precisely this bend and branches off again at an equally acute angle before leaving the town. In addition, the previously direct route from Pahrenz to Mehltheuer has been cut and relocated in favor of the railway line. 51.245189 13.302773 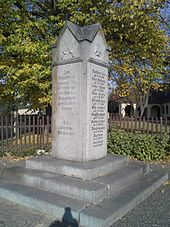 Monument to the fallen in Mehltheuer

After the end of the Second World War , a mass grave was laid at the church in Mehltheuer for the citizens who died in the war, and a memorial named after the dead commemorates the fallen. After the subsequent establishment of the GDR in 1949, the municipality Mehltheuer was assigned to the Riesa district in the Dresden district as part of the 1952 territorial reform .

Of 521 residents of Mehltheuer in 1925, 503 were Evangelical Lutheran , four citizens were Catholic and 14 others were non-denominational.

The last school building in Mehltheuer was built in 1913 in the Heimat style . It was used until 1971, after which the school in Prausitz was responsible for Mehltheuer. The building became a residential building and also housed a consumption . Village community rooms have also been located in the former schoolhouse since 2005.

At the northern end of the village there was an inn in the 19th century. Today there is a large parking lot for long-distance drivers and a small gas station that has now been closed. This was operated under the GO brand until 2015 and was previously part of the GDR's state-owned Minol petrol station network.

In May 1998 the passenger traffic on the railway line was stopped, since 2000 there have been no more freight trains. Since the end of 2007, the line with the station has been officially closed.

For the 2011 census , a total of 135 residential buildings with 165 apartments were counted in Mehltheuer. The living space per apartment averaged 97 square meters, the vacancy rate was 7.3 percent.