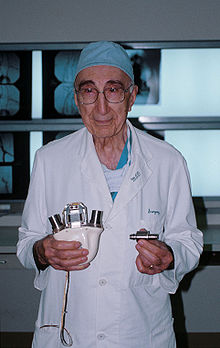 Michael Ellis DeBakey or Michael Ellis De Bakey (born September 7, 1908 in Lake Charles , Louisiana , † July 11, 2008 in Houston , Texas ) was an American heart surgeon ; Among other things, he perfected the heart-lung machine and was involved in the development of surgical procedures for the artificial heart . The spelling of his surname is inconsistent even in the publications he has written, the institutions named after him use the spelling DeBakey .

Michael Ellis DeBakey was born under the name Michel Dabaghi as the son of Shaker and Raheeja Dabaghi ​​(who later anglicized the family name to DeBakey ). His parents were Lebanese Maronites who immigrated to the United States. He completed his medical training at Tulane University in New Orleans . During World War II, DeBakey volunteered and became director of the Surgical Consultants' Division of the United States Army . In his military service he suggested u. a. the establishment of the Mobile Army Surgical Hospital (MASH), which later became known through the novel and film of the same name.

In 1969 DeBakey became director of Baylor College of Medicine , also in 1969 he received the Presidential Medal of Freedom , and in 1987 the National Medal of Science .

In 1980 DeBakey was part of the medical team that, shortly before his death, treated the Yugoslav head of state Josip Broz Tito because of his PAD ("smoker's leg"). In 1996 DeBakey headed the international surgical team that performed the bypass operation of the then President of Russia , Boris Yeltsin .

In addition to a classification for aortic dissection , the vascular clamp and coronary forceps he developed (for bypass surgery), an artificial heart system for left heart replacement (used at the Medical University of Vienna), the DeBakey High School for Health Professions and the Michael E. DeBakey Veteran's Affairs Hospital des Texas Medical Center in Houston named it.

With the artificial heart, Denton Cooley preceded him with the first transplant in 1969 , which - since Cooley acted without consulting - led to the fracture of the two surgeons who had worked closely together at Baylor College since the 1950s and, among other things, developed techniques for removing aneurysms. DeBakey performed more than 60,000 surgeries over the course of his career. At the age of 97 he suffered an aortic dissection himself and was saved by doctors at the Methodist Hospital in Houston using the surgical technique he developed.

DeBakey's first wife Diana died in 1972, from this marriage the sons Michael and Dennis, the sons Ernest and Barry died before him. His second wife was the German actress Katrin Fehlhaber , with whom he had the daughter Olga-Katarina.

Since 1999 he was a foreign member of the Russian Academy of Sciences .

" Many consider Michael E. DeBakey to be the greatest surgeon ever. "

- The Journal of the American Medical Association, 2005

" He could be sweet as dripping honey when it came to patients and medical students, but could be brutal with surgical residents. I guess he was trying to make us tough. "

The following books have been published in German: