Novska is a city in Croatia . It has 13,518 inhabitants (as of 2011) and is located at 126 m altitude in the Sisak-Moslavina County , 95 km southeast of Zagreb, on the Zagreb – Lipovac motorway . Geographically and historically it belongs to the (region) of West Slavonia . 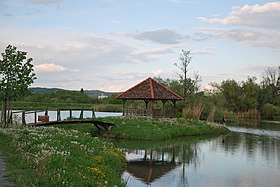 Novska is located in the far east of the Sisak-Moslavina County . Novska is approx. 12 km away from the Croatian-Bosnian-Herzegovinian border at Jasenovac / Donja Gradina and thus also from the Sava . The next bigger cities are Sisak , Kutina , Nova Gradiška and in Bosnia Bosanska Gradiška . Novska is located on the Novljančica and Veliki Strug streams in the south of the urban area. In the north of the city there is also a large forest with an artificial lake ("Novljansko jezero"); there is also another, smaller lake in Bročice, which is known for its many anglers and the numerous tournaments that take place.

The church of Sv. Demetrius was built on the spot where the Church of St. Luke the Evangelist now stands. This was mentioned for the first time in 1489. Until the invasion of Turkish troops, the Novska area belonged to Countess Katarina Svetačka. Then Kristofor Svetački II became a Turkish vassal . After he realized that he could not keep his property, he gave his fortresses to the sultans , including Novska, which the family had built in 1532. The fortresses were built back then to protect themselves from Turkish troops. Luka Ilić Oriovčanin testifies to the existence of these fortresses. It is said that the fortress stood south of today's Radnička ulica .

The Novska region was owned by the Svetački family for 450 years; it is first passed down from 1231. During their campaign, the Turks conquered the most famous fortification, the largest fortress in the area, the Kraljeva Velika . This village is now near Lipovljani , 9 km from Novska.

Novska was part of Austria-Hungary until 1918 . Since 1881 Novska belonged to the Požega county in the autonomous kingdom of Croatia-Slavonia (at that time also called Poschegg in German ). After the First World War , the Kingdom of Serbs, Croats and Slovenes declared itself independent.

The city of Novska has a total of three schools.

Novska is located on the Zagreb-Lipovac (A3) motorway, which was part of the Autoput Bratstvo i jedinstvo in the former Yugoslavia . Novska is also located on the state road D47 , which extends from Lipik to Dvor on the Bosnian-Herzegovinian border, and on the D312 , which connects the intersection with the D47 with the center of Novska.

In Novska there is a train station just outside the city center. There has been no direct train connection from Germany since 2012. The following trains stop at the Novska railway station: 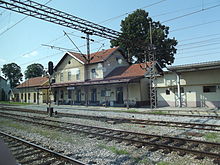 The train station in Novska

Novska has been in partnership with the German city of Mengen in Baden-Württemberg since 2013 .

Towns and municipalities of the Sisak-Moslavina County