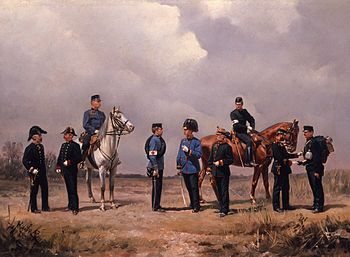 Brüch was the son of an Austro-Hungarian officer , completed the military junior high and military high school as well as the Theresian Military Academy in Wiener Neustadt . During this time at the academy, he already received artistic recognition in the form of a gold watch that was given to him by Emperor Franz Joseph I for a drawing dedicated to him. In 1891, Brüch joined the Austro-Hungarian Infantry Regiment No. 6. In 1894 he was transferred to the Military Geographic Institute , where he studied painting in his free time.

On November 1, 1895, Brüch was promoted to lieutenant and at the same time received the order from the Reich Ministry of War to paint 33 pictures for the Millennium Exhibition in Hungary in 1896, which were supposed to document the adjustment of the joint Austro- Hungarian army at the time of the exhibition. After completing this series, he received a post as a drawing teacher at the infantry cadet school in Vienna from 1897 to 1901. Meanwhile, Brüch had the opportunity to devote himself to art studies, where he spent two years at the Munich Academy with Wilhelm von Diez .

From 1903, Brüch was transferred to the reserve and has since worked as a freelance artist, developing into a well-known and sought-after portrait painter. The last portraits that were made by the emperor came from Brüch's hand. 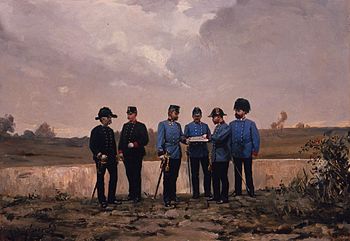 When the First World War broke out , Brüch was called up as a captain in the army. In 1915 he published a collection of portraits under the title “Our Army Leaders”, which was widely used. Brüch was also an official war painter in the Austro-Hungarian war press headquarters .

Brüch spent his twilight years in Ticino , became a Swiss citizen and died on March 31, 1943 in Melide, Switzerland.

Oskar Brüch's main work is the 34 oil paintings that are on display in the permanent exhibition of the Army History Museum (Hall V / Franz-Josef-Hall) and show the adjustments made by the Austro-Hungarian Army in 1895. Brüch received the commission for these paintings in 1894; they were intended for the Millennium National Exhibition held in Budapest in 1896 on the occasion of the 1000th anniversary of the Kingdom of Hungary .

This series of images, which is particularly important for military-historical research because of its attention to detail, has a checkered history: At the Budapest exhibition of 1896, the ku Honvéd and the kuk army were to be presented not only in its historical development, but also in its current form. To this end, the Imperial and Royal War Ministry commissioned the “Photographic Institute of the Technical Military Committee” to initially take an extensive series of photographs with which not only all staffs, troops and institutions of the army recorded in their various adjustments, but also the professional activities of the troops and Establishments should be held in characteristic scenes. Furthermore, the Reich Ministry of War had a certain number of these group and professional photos transferred to a larger scale on canvas by the Military Geographic Institute and then painted over in oil, which turned the raw product into "color photos" in the literal sense of the word. For example, Lieutenant Oskar Brüch at the time was given 34 uniform pictures for coloring, although he was not limited to simply painting over the templates. Rather, Brüch's artistic achievement lay in the fact that he hardly adhered to the templates, regrouped the people on the templates according to his own artistic composition and relocated them to landscapes that he freely designed.

After the Budapest exhibition was over, the paintings were handed over to the then Austro-Hungarian Army Museum, where they immediately found their place in the permanent exhibition. Only in the course of some renovations in the area of ​​the exhibition of the First World War were they removed and deposited in October 1931. During the Second World War , the series was outsourced and should have survived war damage and the post-war period well. After 1955, the paintings were given on loan to military barracks to decorate offices and accommodation, but were soon withdrawn again so that the entire series of images could be shown in the permanent exhibition of the Army History Museum.