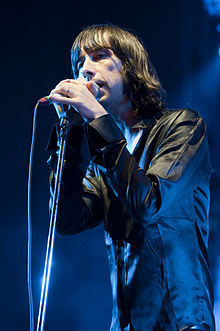 The band initially consisted of Bobby Gillespie (formerly The Jesus and Mary Chain ), Andrew Innes, Robert Young, Gary Mounfield (formerly The Stone Roses ) and Kevin Shields ( My Bloody Valentine ). Primal Scream changed their line-up and musical styles quite often, the only constant member being Bobby Gillespie. The band released their records on the Creation label until 2000 ; today they are under contract with Sony / BMG.

Starting as a psychedelic rock band, whose music, accompanied by an informal guitar sound, was supposed to have an instinctive and original effect, they soon combined rock with dance music. Their 1991 album Screamadelica gave the band their worldwide breakthrough. The album was voted # 1 of the "50 Druggiest Albums Ever" in 2011 by the music magazine New Musical Express. The DJ and producer Andrew Weatherall formed a significant influence on the band with his sounds at that time.

In 1994 the band switched to a phase in which they played classic rock in the style of the Rolling Stones , and then switched to complex electronic and more aggressive music. The 1997 album Vanishing Point was a step back to the band's psychedelic roots, whereas the albums XTRMNTR (2000) and Evil Heat (2002) clearly had electroclash influences.

In 2006, Primal Scream reached number 5 on the British singles chart with their single Country Girl , their highest position in Great Britain to date. The album Beautiful Future (2008) is Primal Scream's first release on the new label B-Unique. The first single from the album was produced by Paul Epworth (including Bloc Party ). In May 2011 their first live DVD Screamadelica Live was released , and in May 2013 the new album More Light .