The title of this article is ambiguous. Further meanings are listed under Poodle (disambiguation) .

The poodle (French caniche ; Italian barboncino ) is a breed of dogs recognized by the FCI ( FCI Group 9, Section 2, Standard No. 172 ). Poodles are lively and have woolly, curled hair. They are named differently based on their size: standard poodles (also king poodles), small poodles (also medium poodles), miniature poodles and toy poodles. The FCI has assigned responsibility for the breed standard and the development of the breed to France. Other breed associations assume in their breed descriptions that the breed originated in Germany. This statement about the origin of the breed can also be found in the Encyclopædia Britannica and the Columbia Encyclopedia .

Originally, poodles were retrieving hunting dogs specializing in water hunting . The name comes from the old German puddling and means to splash in the water. It is said that in its history it also served as a herding dog , but this has not been proven. In the course of further breeding, the poodle largely lost its hunting skills, but the joy of retrieving has remained. Today he is valued as a particularly intelligent family dog .

According to the cynologist R. von Schmiedeberg (editor of the first cynological magazine in Germany, Der Hund ), the oldest mention of the poodle comes from 1555 by Conrad Gessner.

Von Schmiedeberg reports on two different breeds with the name Poodle: "Beautiful Poodle" and Sheep Poodle. The sheep or herding poodle , however, is a separate loft of a group of dogs not recognized by the FCI, the old German herding dogs .

At the beginning of poodle breeding, at the end of the 19th century, there were only large and small poodles, in the classic colors black, white and brown (although brown was not considered.) For a while it was disputed whether Germany, France or Russia was the country of origin of this dog breed be. France was then determined as part of the FCI recognition in the 1930s. Another size has now been added to the breed standard, the miniature poodle, which was followed by the toy in the 1990s; thus there were now four size variants.

In the 1960s "silver" and in the 1970s "apricot" were included in the official standard as colors. The recognition of the new color "Red" by France and the FCI took place in April 2007. Poodles come in almost all color variants that exist in the canine world. In the 1980s poodles were registered in Germany and two-tone, but only in white with black patches (Harlequin) and black Loh (black-tan). Black-tan and harlequin poodles are now recognized nationally in Austria and the Czech Republic.

In Germany, every year more than 2,000 pups in the VDH - studbooks entered. Well over half are miniature poodles, the most popular colors are black, white and fallow.

The fur of a poodle is fine, woolly, dense and curly. It feels soft, does not change seasons and grows continuously, so it needs to be sheared regularly because poodles do not shed. By nature, the poodle is a long-haired, wire-haired dog. This can be seen from the fact that the shorn poodle has eyebrows and whiskers that grow back particularly quickly.

The four poodle variants only differ in size, but not in appearance. The distance between the shoulder blade and the ischial tuberosity is slightly larger than the shoulder height, which corresponds to the height of the croup . The poodle's back is short and the belly line is pulled up. The poodle's gait appears dance-like and springy, it should - as the breed standard requires  - convey an impression of pride and elegance. The slightly slanted eyes are black or dark brown, the nose is black. However, brown or apricot poodles have amber eyes and a brown nose. The tail sits high and is carried straight up or over the back.

Within the FCI, two-colored dogs related to the poodle may not be referred to as poodles.

Poodles are family dogs that, because of their above-average learning ability, are used in all areas of dog sports such as agility , obedience , protection dog sports , etc. Standard poodles are successfully trained as catastrophe, corpse search and guide dogs .

Since poodles do not shed, they are usually shorn. Long-haired poodles need to be brushed several times a week to keep their fur from becoming matted. The common exhibition chores today are the puppy clip and the fashion chur. The lion shear has not been shown at exhibitions since the mid-1980s.

The origin of the poodle shear can be found in the past as a hunting dog that also works in water: In order to protect the lungs and heart from the cold of the water and at the same time to obtain maximum legroom in the hindquarters, the dogs were sheared from the middle of the back. This shear was also popular in the salons and became more and more refined and varied. According to the FCI standard, unbeared poodles are still not eligible for a title at exhibitions.

In large poodles, as in all large dogs, hereditary hip dysplasia (HD) can occur. Therefore, only parent animals may be bred if they have no corresponding findings.

Progressive retinal atrophy , an inherited eye disease that leads to blindness , can occur in small, dwarf and toy poodles . Genetic tests can be used to identify the carriers before breeding use. Another eye disease is cataract (the cataract). Dwarf and toy poodles can develop hereditary patellar luxation , a pathological displacement of the kneecap; Characteristic: the animals limp. As with the cataract, clinical examinations are mandatory before breeding use. In addition, congenital ectopia of the ureter is more common than average.

The sebaceous adenitis is a disease that in addition to the Akita Inu mainly affects poodle and is often diagnosed too late. Here the sebum glands are destroyed by the own immune system. This leads to an undersupply of the hair that falls out. 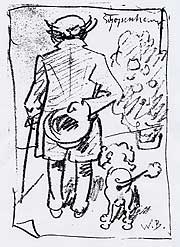 The term of the gist of the matter comes from Goethe's drama Faust . In it, Mephistopheles appears Faust in the form of a poodle. When he reveals his true nature, Faust comments: "So that was the crux of the matter!"

The philosopher Arthur Schopenhauer had always had a poodle, Butz / Atman , since his adulthood , which he replaced with a new one about every ten years. He was convinced that a poodle contained all poodles and advocated the same for humans.

The American writer John Steinbeck also had a poodle. In his autobiographical novel " The Journey with Charley: In Search of America ", Steinbeck describes an eleven-week road trip through America, on which he goes with his ten-year-old standard poodle Charly in a converted pickup.

Another author is Thomas Mann , who also kept a poodle as a companion. In 1939 at Princeton, he got a black poodle named Nico from an admirer, Caroline Newton, who also appears in his diary entries. In a diary entry of January 6, 1940 it says: “Quarrel with the poodle because of his disobedience after finding repulsive things.” He also wrote in a letter on August 7, 1941, “He bothers me terribly, but I loved him at first sight . It lies on my foot under the desk. ”In a letter of January 13, 1950 to Alfred Neumann , Thomas Mann describes in detail the disappearance of the beloved poodle. It later became clear that it had been run over. Another black poodle, named Nico, followed in his life and was given by his children for his golden wedding anniversary. The dog is mentioned in the book "The Last Year" by Erika Mann .

Various classical composers composed music in honor of the poodle, for example Ludwig van Beethoven with the song Elegy on the death of a poodle.

A well-known poodle was Munito II , who went on tour in the 19th century and was said to be able to spell and calculate.

In the 1960s, hybrids were bred with wolves. These poodle wolves , a cross between a male king poodle and a female wolf, have been scientifically examined as part of behavioral research.

The expression like a drowned rat back to the time, often had to jump as the poodle as a hunting dog in waters to the hunted game birds to retrieve, and therefore came back soaking wet.