The Reichenspitze is 3303  m above sea level. A. high mountain in the eastern Zillertal Alps on the border between Salzburg and Tyrol . It is the highest peak of the Reichenspitz group named after it and offers a good panoramic view. Neighboring mountains in the northeast ridge are the 3263  m high Gabler , in the south ridge the Richterspitze ( 3052  m ) and in the northwest ridge the 3280  m high Wildgerlosspitze . The mountain is covered all around by glaciers: In the north the Wildgerloskees, in the east the Rainbachkees and in the southwest the Kuchelmooskees.

The first ascent was made in 1856 by a farmer from Prettau in the Ahrntal , whose name is no longer known, from the south-east over the east face, a route that today (in the summit area) is rated UIAA III . The first tourist ascent took place on July 16, 1865 by Peter Haller from Gmünd and forest guards Anton Peer and Josef Unterrainer from Schönachtal. 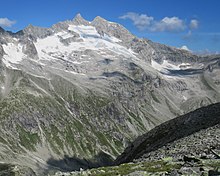 The summit can be reached from the Plauener Hütte (2373 m), from the Richterhütte (2374 m) or from the Zittauer Hütte (2328 m) as an alpine tour. The normal route leads from the Plauener Hütte first on a marked mountain path to the Kuchelmooskees, then further up the glacier to just before the ridge at the Hahnenkamm and from here over the dividing summit slope, partly in climbing (difficulty level II) to the summit cross. In winter, the mountain is often climbed as a ski tour from the Zillergründel reservoir via Kuchelmooskees.