The Richard-Wagner-Straße is a street in the Upper Franconian city of Bayreuth . It is named after the composer Richard Wagner (1813–1883), who lived from April 28, 1874 until his death on the street that was then called Rennweg.

The street leads from Nürnberger Straße to Sternplatz in the city ​​center . Together with Maximilianstrasse, it is part of the main axis that runs through the city from east to west. The street between Dilchertstrasse and Sternplatz has been a "passable" pedestrian zone (access to an underground car park) since July 18, 1980.

Richard-Wagner-Strasse 2, corner house on Ludwigstrasse, before 1913

Richard-Wagner-Straße 17: Keystone in the archway of the successor building to the former "Turkish House", removed in 2018

The Rennweg is first mentioned in the first Bayreuth city book from 1446/48. A "Rennweg" was a supraregional connection road for fast traffic, which was mainly suitable for riders because of its narrow width. It began at the Upper Gate, the eastern of the two drive-through city ​​gates of that time. The open urban canal Tappert ran on its south side . When the city was besieged in 1553, Rennweg and its buildings were completely destroyed and then only poorly restored. It was not until 1741 that the magistrate had it poured out, increased, leveled and paved for the first time from funds from the city ​​chamber . At that time, the Rennweg already served as a connection from the margravial castles to the Hermitage Park, which was begun in 1715, in the east of the city. In a letter to the Bayreuther Tagblatt in 1876, a reader complained that the Rennweg was an unworthy sight in view of the imminent first Richard Wagner Festival . He wrote of horses waiting for hours hungry and thirsty in their wagons, whose remaining excrement offended the eyes and noses of passers-by. The obscene behavior of the stallions when approaching other horses deserves a special reprimand.

On February 1, 1872, Richard Wagner acquired a piece of land on Rennweg and built his house there, which he called Wahnfried . Two years after his death, the Rennweg was renamed Richard-Wagner-Straße in his honor.

As early as the 19th century, the street had an important retail function as an extension of the market. In a pre-motorized time, the usual city parade to stroll up there went. In the interwar period the concentration of retail establishments increased up to the level of the Reichsbank (house number 36), after the Second World War it increased further.

Around 1939, the Bürgerresource building on the outer Richard-Wagner-Straße (at the height of today's Wieland-Wagner-Straße 1–3) was demolished, and since 1828 it has been a social meeting place for merchants and craftsmen.

The road was largely spared from the Allied bombing raids in April 1945. After the city was taken by the United States Army , its local headquarters were set up in what was then the state central bank (Richard-Wagner-Strasse 36).

After the Second World War, numerous houses were demolished and replaced by new buildings:

At a public meeting of more than 800 citizens on March 13, 1848 in the sun room, Mayor Erhard Hagen von Hagenfels was withdrawn from trust. Richard and Cosima Wagner stayed in the Gasthof Zur Sonne during their first stay in Bayreuth in April 1871; the banquet took place in the Sonnensaal on May 22, 1872 on the occasion of the laying of the foundation stone of the Richard-Wagner-Festspielhaus .
The house at Richard-Wagner-Strasse 4 was the home of the Jewish writer Hilde Marx , whose parents ran the Schriefer textile department store there. In 1929 she received the Jean Paul Prize from the city of Bayreuth.

On the new building built for the company C&A , the business premises of which were vacant from 2009, the keystone of the Turkish house , which was probably created by Elias Räntz and depicting a Turkish head, was installed in an archway. However, it disappeared in the course of a renovation in 2018.

In the post-war period , all three federal highways leading through Bayreuth were bundled in Richard-Wagner-Straße. The B 22 and B 85 , which run together over Maximilianstrasse, merged at Sternplatz with the B 2 coming out of Opernstrasse . They led in full length through Richard-Wagner-Strasse before they parted again at the level crossing on the Dürschnitz . With the opening of the city center ring, the federal roads were led differently. In 1980 the western section between Sternplatz and Dilchertstraße was redesigned to become the city's second pedestrian zone after the lower Maximilianstraße. 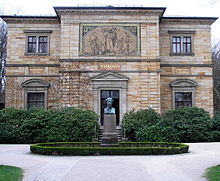 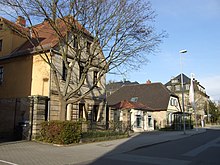 Richard-Wagner-Straße 45 to 51 opposite the Wahnfried house 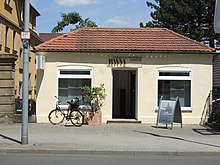