The bittern ( Botaurus stellaris ) is a bird from the heron family (Ardeidae). In spring, the males emit dull courtship calls that can be heard for miles and that the bittern used to have the popular names moor ox , water ox , reed ox and moss cow ( sound example ? / I ). In contrast to the little bittern , it is sometimes also referred to as the big bittern . The bittern lives hidden in extensive reed beds . 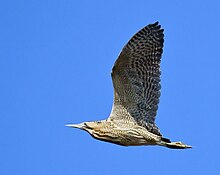 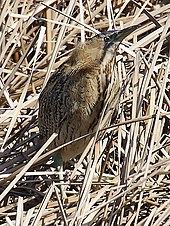 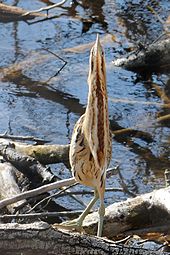 Bitterns reach a height of 70 to 80 centimeters. The females weigh between 817 and 1150 grams, the males between 966 and 1940 grams. Males are not only noticeably larger than females, they are also drawn a little more heavily than these. The plumage also shows geographical variants. In East Asia, for example, bitterns are more conspicuous and have therefore long been classified as a subspecies.

The bittern is thus somewhat larger than a domestic chicken and of a stocky shape with a short, thick neck and short legs, a relatively short, strong green-yellow beak (with finely serrated horn edges). The plumage is finely striped black, yellow-brown and white. The chin and throat are creamy white and have a reddish-brown vertical stripe in the middle.

The appearance and behavior of the bittern is inconspicuous. With her plumage in warm brown tones, she is very well camouflaged in the old reeds. The plumage imitates a pattern of light and shadow that dissolves the contours of the bird even behind a few stalks of reeds. This form of camouflage is known as somatolysis . If you approach the bittern, it assumes the so-called pole position up to a small distance : With its body stretched up, its beak raised to the sky, but its eyes still pointing forward to observe, the bittern sways gently to the rhythm of the surrounding reeds; their longitudinal stripes act like individual stalks. Young bitterns that are not yet fully fledged show this behavior.

The bittern is a partial puller . A number of bitterns remain in their breeding area if the water does not freeze or only migrate to somewhat more favorable climatic regions. Some populations, such as in England and the Netherlands, are almost exclusively resident birds . Populations overwinter in Central Europe, Eastern Europe up to Ukraine, Eastern Saudi Arabia, Iraq, Iran, Turkmenistan, Pakistan, Northern India, Nepal, Bangladesh, Southeast China, Southern Thailand, Northern Malaysia as well as Libya, Egypt and Africa south of the Sahara. The wintering area there extends from Mauritania, Senegal, Ghana, Gambia, Gabon, Nigeria, Cameroon, Kenya, Northern Zaire, Sudan, Ethiopia and Eritrea.

The bittern prefers to live in extensive silting areas of lakes , backwaters and ponds . Well-preserved, extensive stocks of reeds and reeds are particularly important , in which the birds skilfully climb around, where they can build their nests and find shelter.

The bittern needs littered low vegetation to search for food, e.g. B. ditches, bank areas and open water points. During the breeding season, they vigorously defend their feeding and breeding areas. There are even attacks in the air. Outside of the breeding season, bitterns can also be seen in larger groups.

The food spectrum of the bittern is very large. They mainly feed on small fish, frogs, amphibians and aquatic insects. They also eat smaller mammals such as mice and small birds, and also rob the nests of ducks.

The bittern is nocturnal and can therefore hardly be observed during the day. Young bitterns (like many herons) roam widely, while many of the European breeding birds overwinter in their breeding area, which is often their undoing in severe winters. However, a large part moves to western and southern Europe or tropical Africa in winter. 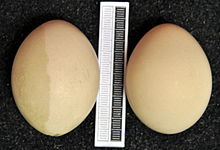 The males are polygamous and mate with several females where the population is large enough. They do not participate in the breeding business or in the rearing of the young. The young are nestled and start flying when they are around two months old. According to the rules of the nesting species, the bittern should actually be monogamous. We know, however, of male bitterns with three to five, even up to seven breeding females, whose nests are arranged in a star shape around their territory. The nest of reeds, reeds and sedges is padded inside with leaves and dry grass.

After 25–26 days, the brown dotted nest stools hatch. After just 8 days, they take the “stake position” in the event of imminent danger; they usually leave the nest at the age of 4 to 5 weeks (but often after 2 to 3 weeks) and then roam around in the area until they are completely independent and airworthy at 8 weeks.

The bittern occurs from North Africa across the temperate latitudes of Europe to East Asia . We find the European focus of distribution in the wide swampy landscapes of Eastern Europe . Between 4,100 and 4,800 breeding pairs brooded in Poland in 2002/2003. There are larger occurrences of bittern on Lake Neusiedl in Austria and on the Mecklenburg Lake District. In the German states of Hesse and Baden-Württemberg, it has disappeared as a regular breeding bird. In Bavaria and North Rhine-Westphalia there are only a few single pairs left.

The bittern is endangered by the loss of its habitat, in particular the destruction of reed stands or drainage. In many bodies of water, leisure activities have also had a catastrophic effect on the population, as bitterns are extremely sensitive to interference. However, they also suffer from drainage and lowering of the groundwater level, as occurs, for example, in the context of land consolidations and an intensification of agriculture. In addition, there are natural population fluctuations: In severe winters, individual populations can be completely wiped out. Despite this sensitivity to cold winters, the bittern is one of the species that, according to ornithologists, does not benefit from global warming. Forecasts based on climate models assume that the bittern will shift its range further to the northeast by the end of the 21st century. In contrast, stocks will decline in the south, west and central Europe .

The bittern is on the red list of breeding birds in Germany in category 3 (“endangered”) and is strictly protected according to BNatSchG and BArtSchV . Between 2005 and 2009, around 950 to 1,100 breeding pairs were counted here.

The bittern in literature

The sound of the animals is mentioned in the description of the atmosphere on the block mountain in Goethe's Faust .

In Arthur Conan Doyle's Sherlock Holmes novel The Hound of Baskerville , Dr. Watson and Mr. Stapleton from the moor an inexplicable cry. Since the naturalist Stapleton does not believe in the ghost dog, he thinks it could be a bittern.

At the beginning of the third part of Søren Kierkegaard's Stages on Life's Path , the bittern from Søeborg-Sø , which calls four times, is called the secret voice of loneliness . The strange bird has only one wish, that it stay lonely.

In Eichendorff's work From the life of a good-for-nothing , the first-person narrator describes in the first chapter that he sits like a bittern in the reeds of a pond in the garden.

In Die Raben by Tomas Bannerhed (German btb Verlag, 2015) the young farmer's son Klas experiences the eerie nocturnal call of the bittern, which even impresses his calm and well-traveled girlfriend.

In “Dörchläuchting” by Fritz Reuter , the Highness, the Grand Duke of Mecklenburg-Strelitz, is afraid of a creepy (“terrible spook”) because of the dull scream of the bittern (“Rodump”).