from Wikipedia, the free encyclopedia
Battle of Roncesvalles
Part of: Charlemagne's Spanish campaign 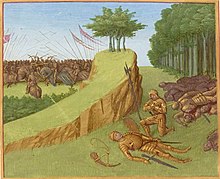 The Battle of Roncesvalles was an attack by the local Basque population on the rearguard of a Frankish army under Charlemagne on August 15, 778 . It took place near the Basque village of Roncesvalles ( Orreaga in Basque , Roncevaux in French ).

The Islamic governors in the north of the Iberian Peninsula decided after disputes with the Emir Abd ar-Rahman I of Córdoba (ruled 756–788) to make themselves independent, each in his province. But since they feared they would not be able to withstand the power of the emir, they turned to the Franks north of the Pyrenees for help.

In 777 , while Charlemagne was still at war with the Saxons, an envoy from the renegade governors, Suleiman ibn al-Arabi, governor of Barcelona, ​​Husayn, governor of Saragossa , and Abu Taur, governor of Huesca, met in Charles Camp to secure the aid of the Franks against the Emir of Cordoba. Karl immediately recognized the possibility of expanding his sphere of influence and accepted.

In the spring of 778 two Christian armies invaded Moorish-controlled Spain. The larger of the two, consisting of soldiers from Neustria and Saxony , was under the command of Charles. They gathered near Agen and crossed the Pyrenees at Saint-Jean-Pied-de-Port . Pamplona , Jaca and Huesca opened their gates, the Ebro was crossed, and the army finally encamped outside the walls of Zaragoza. The smaller army, whose soldiers came from Austrasia , Burgundy , Italy , Provence , Septimania and Bavaria , crossed the Pyrenees in the east, invaded Catalonia and met with the larger army in front of Saragossa.

Suleiman ibn al-Arabi, however, did not let the Franks into his city - the renegade governors began to regret their decision in view of the Christian invasion, especially since Karl also appointed Frankish and Christian governors of his own in the cities that had fallen to him. Karl, on the other hand, was not prepared for a siege, neither with material nor with food, and feeding the soldiers from the less fertile surrounding area was also out of the question, so that Karl only had to retreat. During this retreat, he attacked Pamplona , had it sacked by his troops and destroyed the city walls so that this city could not rise against him. In doing so, he made the Basques his enemy.

On August 15, his army crossed the Pyrenees at Col de Roncevaux . In this narrow passage, enclosed between the high mountains, the Frankish army was forced to march in a long and vulnerable line with only a few men next to each other. The country's Basque population, clearly outnumbered, was just waiting for the right opportunity to raid.

Lightly armed and used to moving in the steep and rocky terrain, they let the main body of the army pass, then pounced on the rearguard. The Franks, hardly agile on their horses and with their long lances, were completely surprised.

The rear guard was cut off from the rest of the army and pushed into the background of the valley together with the entourage. A desperate battle broke out in which the Frankish soldiers were cut down to the last man. The Basques plundered the train and hurried back into the mountains. The main army turned around immediately, but arrived too late on the battlefield.

Among the victims were high dignitaries of the Franconian court: Karl Hausmeier Egilhard, Count Palatine Anselm ( Robertiner ) and the governor of the Breton Mark , Count Roland .

From Roncesvalles to the Roland saga

In the centuries that followed, Roland became France's most popular hero. In the memory of the people, the Roncesvalles massacre turned into a gigantic battle - this at a time when the Christian knights of the West embarked on the crusade to liberate the Holy Land . Charles' expedition against the Muslim rulers of Spain was stylized as an early crusade - and Roland, as a matter of course, a Christian martyr .

At the Battle of Hastings in 1066 , the Normans sang a song that celebrated the story of Roland. At the end of the 11th century there was an epic in Romansh , the Chanson de Roland , the Roland song , which is now counted among the masterpieces of epic poetry of the Middle Ages.