Dread flight of the Boeing 767

Schreckensflug der Boeing 767 (original title: Falling from the Sky: Flight 174 ) is an American film from 1995. The director was Jorge Montesi , the screenplay was written by Lionel Chetwynd based on the 1991 book Freefall by William and Marilyn Hoffer. The plot is based, in noticeable dramaturgical changes, e.g. B. the role of the pilots in refueling, on the events of Air Canada Flight 143 in July 1983, whereby the names of the pilots and the flight mechanic on board were not changed.

In a prologue, two pilots are confronted with a novel problem in the flight simulator . You crash and complain about the program. To their dismay, however, they learn that the simulation is based on actual events:

Summer 1982: the Canadian airline Canada World Airways receives the newly commissioned Boeing 767 aircraft . The aircraft is being prepared for its domestic flight from Montreal to Edmonton by the ground crew . 63 passengers and six crew members board flight 174, including co-pilot Maurice Quintal, who initially refused to take the flight because his wife was terminally ill at home. The flight attendant Lynn Brown has meanwhile returned from maternity leave, while her colleague Florence Bisaillon hates flying and only does her job because of the good pay. Among the passengers in the first class is a friendly, venerable war veteran, while a few seats down a snobbish businessman speaks instructions for his secretary into a dictaphone. In Economy Class there are, among others, the young lovers Frank Farr and Norma Sax, who reject children or marriage wishes, as well as the flight mechanic Rick Dion with his fearful wife Pearl and their child.

When the aircraft reached cruising altitude, the engines suddenly fail. The pilots have to discover that the ground crew, who are still inexperienced with the type of aircraft, incorrectly calculated the amount of fuel with the modern on-board computer. With the Boeing 767, this is no longer recorded in pounds and gallons, but in kilograms and liters according to the metric system . The transport machine is then transformed into a 150-ton glider and only with the dynamic pressure turbine , the pilots, supported by flight mechanic Dion, manage to keep the machine in the air. Little by little, the passengers also notice that something is wrong and the plane tries an unscheduled landing at Winnipeg Airport . The machine cannot reach the alternate airport, however, and Flight 174 tries to make an emergency landing at an unused airport for gliders and small sport aircraft in Gimli (Manitoba) . The exceptional situation made many of the aircraft occupants reflect on their previous lives. The first-class war veteran remembers his comrades who didn't get away with their lives in World War II and shows no fear. The businessman, who sacrificed his private life for the benefit of his company, dictates a message to his wife who stayed at home. Flight attendant Lynn Brown tries to calm the anxious passengers and feels painfully reminded of her little daughter by the baby on board. 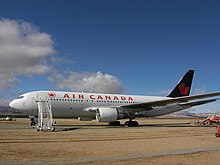 The plane involved in the incident, known as the "Gimli Glider", at Mojave Airport

When the aircraft is about to land at the sports airfield, the cockpit crew has to discover that preparations for a local car race are taking place there. However, the people on the ground manage to clear the runway in time and the Boeing 767 barely evades a family man and his son. The nose landing gear cannot withstand the hard landing and the front part of the machine slides over the concrete runway. A cable fire breaks out in the cockpit, but all passengers and crew members manage to exit the aircraft largely unharmed using the emergency slides.

An epilogue reports on the lives of passengers and crew members after the emergency landing. Copilot Quintal loses his terminally ill wife, the businessman on board sells his company in order to spend more time with his family and the couple Frank and Norma marry a little later.

The film premiered on February 20, 1995 on ABC . Tom Shales of the Washington Post ruled in his criticism, the film never was going off the power and lifted the preference of the director Jorge Montesi for closeups out, and the acting skills of William Devane as captain. Screenwriter Lionel Chetwynd has mastered the genre of the airplane disaster film and has the ingenuity to make the characters appear real. In doing so, he manages to avoid clichés and to maintain the tension, especially in the last half hour of the film.

The cockpit recordings were shot in a real 767 cockpit with a blue screen behind it. The "real" flight captain of Flight 174, Bob Pearson, has a cameo appearance in the film: He plays the training pilot who explains to the two flight captains when the simulation ends at the beginning of the film that this incident actually took place.