Simon Stevin's sailing car for Prince Moritz of Orange in 1600

A sailing cart (also wind cart or country sailor ) is a means of a sail wind driven cart , the - driven by an external force - not to the automobiles (self-moving car) is expected. The principle is used in beach sailing today . 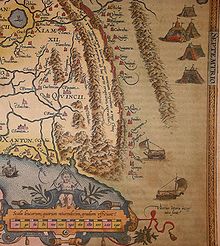 Chinese sailing wagons, detail from the map by Abraham Ortelius (1584)

The Chinese , whose windy plains in the north offered favorable conditions, built the first land sailors.

The invention is said to have been made by the philosopher Kao-ts'ang, according to the first mention in the book of the Master of the Golden Hall , which is assigned to the scholarly emperor Liang (reign 552–554 AD). According to the description, the car could carry 30 people and cover hundreds of kilometers a day.

On the famous map of China by the Flemish cartographer Abraham Ortelius from 1584, several sailing wagons are shown. The map comes from the Atlas Theatrum Orbis Terrarum and is the first detailed map of China to be published in Europe.

The reports of European travelers about the Chinese wind chariot had a stimulating effect on the imagination of Europeans and were also taken up by poets.

In 1589 Jan Huygen van Linschoten wrote in his book Itinerario: “The Chinese are great and imaginative craftsmen, as the handicrafts from this country show. They build and use carts with sails and wheels that are so skilfully made that they are propelled by the wind in the field - just as if they lead on the water. "

In John Milton's verse epic Paradise Lost (1667), for example, For example: "On Sericana's barren land (...), where the Chinese drive their bamboo wagons under wind and sails." 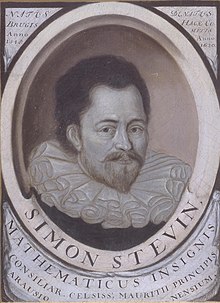 In Europe around 1600, the mathematician , physicist and hydraulic engineer Simon Stevin (1548–1620), inspired by reports about the land sailors in China, built the first sailing car for Prince Moritz of Orange . Stevin drove around the year 1600 with Prince Moritz von Oranje and 26 other people on the coast of Scheveningen and Petten . The scholar Grotius also took part in one of the trips . The vehicle covered a distance of around 95 km in less than two hours.

In his multi-volume novel, published from 1759, the writer Laurence Sterne deals with the life and views of Tristram Shandy, Gentleman also Stevin, whom he calls Stevinus, and the sailor built by Stevin (us).

A model of the car was kept until 1802. The land sailors, which were mainly built in Holland at the time, reached speeds of 50  km / h .

In 1640 an artist, presumably Hendrik Gerritz Pot, used the image of a sailing wagon for his satirical oil painting Flora's Fool's Carriage (Flora's Mallewagen), alluding to the speculative tulip trade that collapsed in 1637. The picture hangs today in the Frans Hals Museum in Haarlem .

This picture largely follows the copper engraving The Fool's Chariot or the Farewell to the Flower Lovers from 1637 by Crispyn van der Passe the Elder. J., depicting the flower queen Flora and 5 people on the sailing wagon with the square sail inflated by the wind .

In the United States, the Great Plains raised the hope of several independent inventors of using sail-powered carts for transportation. The project was realized by an inventor named Thomas, who set off from Westport , Missouri in a sailing wagon in the 1850s and wanted to reach California within six days . He came around 100 km to Council Grove , where his car was badly damaged in a fall. Walt Disney produced the animated short film Saga of Windwagon Smith in 1961 based on the historical inventor Thomas and his covered wagon with sail drive.

As early as the 1820s, the English teacher George Pocock experimented with a stunt kite-powered carriage to avoid the horse tax .

Andrew B. Bauer († September 6, 2010), Bauer Associates, Orange, CA, later aerodynamics technician at Douglas Aircraft, bet 1969 with colleague Apollo MO Smith (1911-1997) and built and drove in 1969 a 4-wheeled one with 2 side training wheels Car and adjustable two-bladed rotor as a turbine faster than the tailwind (DDWFTTW = Dead Downwind Faster Than the Wind). His work was based on a theory paper by a student some 20 years earlier. 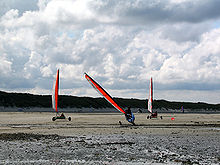 Sand yachting on the wide beaches of Picardy , France (2003)

Today, sailing carriages are occasionally built as so-called beach sailors for leisure and sporting purposes. As a rule, a modern beach sailor is like a three-wheel kayak with one sail . Simpler models also only consist of a bare tubular frame. The beach sailor is controlled by a driver via the steerable front wheel and the sail position. On some models, the wheels can be exchanged for runners in winter, see ice sailing .

A special form of beach sailing is kite buggy riding , in which not a sail but a stunt kite provides traction.

On sufficiently hard, smooth, level surfaces you can roll with inline skates pulled by a kite. Typically, the tensile force of the typical 4 kite lines is combined and transferred to a ring on the hip or body belt via a carabiner. The ring sits near the navel and thus near the center of gravity. The kite flight is controlled by pulling and tilting two handles, the ends of which are connected to the lines to the kite.

Wind cars at the Aeolus Race 2008: First place InVentus Ventomobile (University of Stuttgart, in the foreground), second place in ECN-impulse (in the background)

The Dutch Association of Technology Transfer (ATO, Dutch Society for Technology Transfer) and the Energy Research Center of the Netherlands (ECN, Center for Energy Research of the Netherlands) hosted on 20. – 23. August 2008 in Den Helder in the north-west of Holland a competition in which vehicles powered exclusively by wind power competed against each other. The vehicles had to be able to drive directly - that is, without crossing - against the wind. Because of this requirement, no sails could be used. Instead, the wind power must be captured by means of small wind turbines , a concept that Guido da Vigevano first developed in 1335 for a chariot for Philip VI. had thought up.

Participate in the first race with their vehicles:

Faster than the wind - in front of it and against it

In July 2010, Blackbird demonstrated with propeller action that a wind-powered vehicle can go faster than the wind directly in front of the wind .

Blackbird before the wind

In contrast to the vehicles in the Aeolus Race , whose wind turbines drive the wheels, the Blackbird used a propeller for the record BEFORE the wind , the rotation of which is driven by the wheels.

In this case, the propeller blades of the Blackbird screw themselves forward thanks to the positive angle of attack and profiling in the air mass of the wind moving at the wind speed thanks to wing lift. Viewed in the direction of travel equal to the wind, the plane of rotation of the propeller acts as a sail standing across the wind, which pushes the car forward through the force it generates. Because this "sail" in its own area by means of the propeller blade turns, so to speak, pumps air onto the side facing the flow, i.e. against the wind, the sail and with it the car can be pushed faster than the wind.

When viewed from the outside - land-based - the car with its propeller sail brakes the wind speed locally, from which the impulse (or the energy) that drives the car is obtained.

Blackbird against the wind

In June 2012 a turbine version of the Blackbird drove directly AGAINST the wind faster than the wind . Also more than twice as fast - compared to the ground. Subjectively, the pilot then notices the airstream with a good three times the wind speed.

Little did the Blackbird team know that as early as 1969, Bauer in the USA gave an indication of having driven a wind turbine faster than the tailwind.

According to designer Jens Langert, the project idea is based on the story of Wind Wagon Thomas , who wanted to set up a company in 1853 to transport settlers in North America to the west using the wind, but failed due to technical problems.

Based on the historical model of the Prarieclipper , the replica wagon was built on deck and rigging made of wood and hemp ropes , and the sails were also made of natural fiber. However, the wheels with six spokes and metal rims have narrow pneumatic tires - which were not invented until the 1880s - with a strong tractor profile that allows a good grip with the hands if necessary. Astrakan was named after the apple tree that the Swedish émigré Kristina wrote in the novel by Vilhelm Moberg in the 19th century. sown in America. The car was built in Sweden and transported to the USA disassembled in a 40-foot container . You want to counter the danger of getting into a tornado by quickly hauling in the sails. A film about the journey was supposed to be released in summer 2013.

As early as 1971, George Patterson, inventor of the "Wing Mast" (as well as his son Todd) drove the Aerocycle he designed , with triangular sails about 3 m high and 3 m² hand-held on the big tree above his head. The driver sits far back almost over the rear wheel, the handlebars are supplemented with a quarter-circle railing (an arched tiller ) to the rear. The two-wheeler, with its legs on footrests, can be maneuvered freely with the mast above the steering head on the beach and asphalt. It is said to have reached a speed of 80 km / h in strong winds.

Windbike is a racing bike, which has been supplemented by a 2 m high mast behind the saddle, which carries two diamond-shaped sails spread out with bars and braced downwards (AireLibre.com, Madrid, probably stunt kites). Cross wind generates propulsion, the moment of overturning and yawing are kept within limits thanks to a total sail area of ​​just 1 m².

Pterosail places a foresail between the bowsprit and the central simple or A-shaped main mast on the recumbent tricycle and, according to the manufacturer, should be road legal throughout the USA.

Whike is based on a two-wheeled tricycle at the rear, which has a sloping mast in the middle, on which a sail with an adapted contour is spread backwards and thus reaches 50 km / h.

At the age of 10, the German Gustav Winkler had the idea of ​​building a bicycle driven by a headwind and was able to realize it 45 years later. His 3-wheeled bicycle with a 6-bladed wind turbine was the slowest in one of the international competitions that have been held annually since 2008 on the wind-safe coast of Denmark and the Netherlands.

A kite ferry is required to allow a camera or a device that is supposed to scatter leaflets from above to move up a line of a kite that is already in the sky, i.e. to let it sail. In this way, the main kite can be launched with a lighter load on the payload and this is not exposed to the risk of damage during launch. Only the kite ferry - guided by sliding eyes or pulleys, driven by the wind - lifts the payload, can latch onto the top and remain there, triggered by the arrival at the top, switched to downward travel or pulled down again on its pulling line.