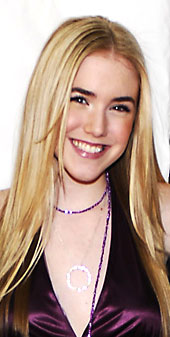 Locke wanted to be an actress at the age of six. At the age of eleven, after appearing in several commercials near Orlando, she moved to Los Angeles with her manager / coach from Miami. There she got a role in Without a Trace as "Brandee Case". A small role in the movie Spanglish followed, where she appeared as "Sleepover Friend".

After that, she made her way to the children's television network Nick, where she took on a recurring role in Ned's ultimate school madness . She later got a role in Phil the Future , which airs on the Disney Channel, and also has a role in Raven Looks Through , where she played Candida for five episodes. One of Locke's major roles was the original English voice for Jenny in the cartoon Monster House . The film was released in 2006 and was produced by Robert Zemeckis and Steven Spielberg and directed by Gil Kenan .

In late 2007 she starred in Resident Evil: Extinction . The young actress played K-Mart , named after the ruined supermarket where she was found. In the 2010 sequel Resident Evil: Afterlife she was seen again.