St. Michael from the southwest 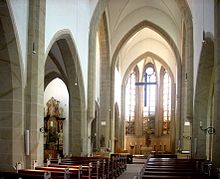 The predecessor of today's church was the Romanesque collegiate church of the Augustinian canons , built from 1125 onwards . Bishop Johann I dissolved the canons' monastery in 1259 because of moral decline and handed the building over to the Cistercians of Isenhagen Abbey, which burned down in the same year . These began in 1412 with the construction of new sections of the church in the Gothic style. The consecration took place on June 5, 1440. In 1462 the construction was completed.

In the 18th century the church area was newly vaulted and received a baroque interior.

In 1806 the Cistercian monastery was abolished and the land was transferred to the Hanover Monastery Fund . The church became a parish church . In 1983, in the neighboring district of Neuhof, a parish center with a chapel belonging to the St. Michael parish was built. In 1985 the Hildesheim diocese bought the buildings in Marienrode in order to settle them with Benedictine nuns from Eibingen . For this purpose, the interior of the choir was completely redesigned.

Since November 1, 2014, the Church of St. Michael has belonged to the parish of St. Mauritius, with which it had already formed a pastoral care unit in recent years .

According to the Cistercian ideal, St. Michael is a towerless three-aisled basilica with a polygonal closed choir and transept . The church is around 130 meters above sea level . On the crossing is a roof turret with the bells, which was renewed in the Baroque as a double lantern with a Welscher hood . The church is clearly structured outside and inside by pillars and arches, but otherwise unadorned.

The oldest piece of equipment is the late Gothic Mother of God with child in the soft style on the northeastern crossing pillar. It originally stood outside in a niche above the main portal; there is now a replica.

The two side altars with Marian and Cistercian motifs, the communion pews , the organ prospect and the gallery parapet have been preserved from the baroque furnishings that Johannes Süssemann created around 1760 .

Heinrich Gerhard Bücker created the refurbishment of the chancel in the 1980s . Noteworthy are the bronze crucifix on a cross made of bog oak in the choir arch and the high tabernacle , reminiscent of a sacrament house , crowned with a large rock crystal ; its four sides are decorated with scenes from the Old Testament , which typologically revolve around the mystery of the Eucharist .

The basic organ is still the work created by Christian Vater 1749–1752. In 1888 August Schaper added "romantic" timbres to it and was thoroughly restored in 2005/2006. The instrument has 29 registers on two manuals and a pedal .