The killing stone at Katzenhöhe 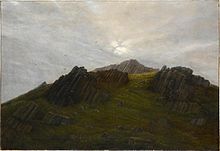 The Steinberg , formerly called Katzenkopf , is 442.5  m above sea level. NHN high mountain in the Großschönau basin and hill country in eastern Upper Lusatia . The wooded phonolite dome is located in the Bertsdorf district in the Bertsdorf-Hörnitz municipality in the Görlitz district of Saxony .

The Steinberg, together with the Breiteberg and the Seidelsberg, form a group of three phonolite peaks. On the wooded hilltop there are some small-scale, near-natural forest sections. Common broom and hornbill wheat thrive on the dry and warm forest edges of the eastern and southern slopes. Part of the cliff top region is protected as a natural monument.

On the Meilenblatt the summit is still known as Steinberg, the plateau to the north as Katzenheyde . The summit has been called Katzenkopf since the 19th century . The name is said to be derived from stray wild cats.

Probably the painter Carl Gustav Carus visited the cat's head in 1820. The picture Geognostic Landscapes with the subtitle Katzenköpfe bei Zittau , created after his trip, is often attributed to the singer's height near Waltersdorf, which Carus can be shown to have visited. This mountain, which was later heavily changed by a quarry, was still called Unglückstein at the time , whereas in the entire Zittau area only the Steinberg was referred to as Katzenkopf . From 1847 the landowner had the cat's head planted with deciduous and coniferous trees.

In 1856 the Großschönau entrepreneur Christian Friedrich Fabian founded the Pochefabrik as the first Großschönau factory at the western foot of the Steinberg. Their ruin was demolished in the 2000s.

The summit of the Steinberg offers no view because of the high forest. From the slopes below the summit there is a clear view to the east and south-east over the Zittau basin to the Iser and Jeschken mountains , to the south and south-west the western Zittau mountains with the Jonsberg , Buchberg , Lausche and Weberberg are visible. On the eastern slope, the Oberlausitzer Ringweg leads from Seidelsberg to the Butte.