The former synagogue in Affaltrach

The former synagogue in Unteren Gasse in Affaltrach , a district of Obersulm in the Heilbronn district in northern Baden-Württemberg , was built in 1851 and today serves as a museum on the history of the Jews in Heilbronn district and city .

After the old Affaltrach synagogue in Unteren Gasse was closed in 1844 due to disrepair by the Weinsberg District Office, the Jewish community of Affaltrach decided to build a new synagogue, which had been considered for years . The property for the new building, only a few meters away from the old synagogue, was donated by the Jew Nathan Krailsheimer. He had once lived there in a two-story house with a barn and baking room, but then built a new house in today's Weilerstraße and had the old building on Unteren Gasse torn down. In addition to the building site, he donated 600 guilders as the basis for the new building. A first draft of the Weinsberg master craftsman Bürk from 1845 for a two-story synagogue building with side wings for a Jewish school and cantor's apartment could not be realized because of the expected construction costs of almost 11,000 guilders. In 1847, Bürk made a second design that combined the synagogue, denominational school , cantor's apartment and mikveh (ritual immersion bath) in a single wing of the building, which could be realized for less than 6,000 guilders. After the construction decision was delayed several times due to differences with the Jewish community in Eschenau, which was at times a subsidiary community, and due to the revolutionary unrest in 1848, Bürk's second plans were implemented in 1851. After six months of construction, the building was inaugurated on November 28, 1851. Due to numerous deductions, the actual construction costs came to just under 4,000 guilders.

The synagogue in Affaltrach was built in the style of historicism with neo-Romanesque and neo-Islamic elements as a two-storey building with six window axes on the longitudinal and two window axes on the transverse sides. The dimensions of the building are 8.95 × 18.90 meters. The synagogue room formed the right half of the building and extended over both floors, with the women’s gallery running around on three sides on the first floor . The synagogue room, including the women's gallery, was equipped with seats for a total of 142 people. On the first floor there was a school room as well as a meeting room and guest room on the left side of the building, on the upper floor was the cantor's apartment with living room, bedroom and kitchen as well as another room. It is worth mentioning the strict external and internal symmetry of the building, which is also manifested in the two portals. The right of the two portals was originally without function. The false door resulted in a symmetrical facade design from the outside, at the same time the synagogue interior could be designed symmetrically with eight rows of benches to the left and right of the central aisle. The mikvah was located in the basement and was accessible from the street through an outside staircase. The mikvah was originally fed by a spring also located in the basement of the building. 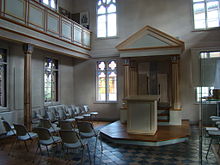 While the synagogue room and the living quarters hardly underwent any changes in the period before the Second World War, the mikveh was rebuilt many times. Renovations took place in 1880/82 and 1901, and in 1911 the mikveh was renewed again when public water pipes were installed. During the First World War , a copper kettle used to heat the water had to be delivered. After the First World War, the mikveh was no longer used; instead, the Jewish community used the public bathing cabins set up in a house on the corner of Silbergrubenstrasse and Am Ordensschloss for ritual baths .

A number of Jewish teachers lived in the teacher's apartment, most recently Samuel Spatz, who was transferred to Rexingen in 1904 when the denominational school in Affaltrach was closed due to the declining size of the community. Afterwards, a Jewish widow lived in the rooms until her death in 1918. On April 1, 1919, the Affaltrach mayor Wilhelm Oßwald rented the apartment and undertook to refrain from disturbing noises and actions during church services. In 1920 the Öhringen overland plant took over the apartment, which had meanwhile been vacated again, in order to accommodate a district fitter with his family. As a result, the Görisch family lived in the apartment from 1925. The school and guest rooms below were used around 1930 as alternative quarters for the rural advanced training school, and later rented to a Jewish family.

Due to the decline of the Jewish community in the late 19th century, the number of men necessary for church services was often lacking. From 1917, there were no more regular services in the synagogue because of the Jewish men who had been drafted into the military. Even later, due to the continuing decline in the size of the congregation, regular worship could no longer be established in the long term. Until the late 1920s, the building was very dilapidated. The last service took place in 1935.

The unused synagogue room and the rooms in the basement, which a Jewish family lived in at the time, were devastated during the November pogroms in 1938 . Due to the non-Jewish residents on the upper floor and the close development of the Affaltrach town center, however, the building itself was not destroyed. From 1940 to 1942, Polish prisoners of war were quartered in the synagogue room and in the basement of the left half of the house. In accordance with the provisions of the 10th ordinance on the Reich Citizenship Act of 1941, the building came into the possession of the Reich Association of Jews in Germany , which sold it to the Affaltrach community on October 21, 1942 - at that time the Jewish community in Affaltrach no longer existed. From August 1942 onwards, the packing department and the dispatch department of the Ackermann twisting mill , which had been outsourced during the war, were located in the synagogue building, for which a continuous floor was installed on the right side of the building at the height of the women's gallery.

After Affaltrach was occupied by American troops on April 13, 1945, the synagogue building was looted by Polish slave laborers the following day. However, the building remained the warehouse of the Ackermann twisting mill and the Görisch family's apartment. In 1948 a concrete floor was placed in the mikveh and the room was converted into a laundry room. In July 1949 there was a settlement between the JRSO and the Affaltrach community, according to which the building remained in the possession of the community for a compensation payment of DM 10,000. In late 1949, the Ackermann twisting mill moved out of the building. Since no commercial tenant could be found, the community left the synagogue hall to the local sports club as a gym. The rooms in the basement on the left side of the building were rented out for residential purposes; the Görisch family continued to live above them until 1958. From 1951 the music association also used part of the building, and around the same time a table tennis group from the YMCA was added. At that time, the use of the building as a school building and the conversion to an apartment building were discussed on various occasions, but ultimately not implemented. On February 1, 1956, the Affaltracher emü-möbelwerk rented the synagogue room as a storage room. The left side of the building was still inhabited, later by Italian guest workers from the furniture factory and by Turkish families, among others. Some of the rooms also served as shelter for the community for the homeless. After the furniture factory no longer used the storage rooms in 1980, the community stored furniture and household items there for asylum seekers.

In 1983, considering the demolition or preservation of the Sontheim synagogue , the first considerations were made to set up a memorial in the Affaltrach synagogue if the Sontheim synagogue could not be preserved. The memorial idea found broad support from the population as well as from churches and political parties, so that in May 1985 an association for the preservation of the Affaltrach synagogue was founded, which received financial and non-material support from the Obersulm community and the Heilbronn district . The district took over the building free of charge from the Obersulm municipality on December 16, 1986 and essentially financed the two-year thorough renovation of the building, during which the meanwhile redesigned mikveh was exposed again and the former floor plan of the synagogue room with a women's gallery was restored. The building was opened to the public on November 9, 1988 with a celebration. After a further six months of development, a museum on the history of the Jews in the district and city of Heilbronn was opened on May 11, 1989. The district of Heilbronn is responsible for maintaining and equipping the building, the ongoing maintenance costs are borne by the municipality of Obersulm.

Exhibition rooms on the upper floor

The museum was built in cooperation with the Association for the Preservation of the Affaltrach Synagogue and the Heilbronn district. The Association of Friends of the Former Synagogue Affaltrach is responsible for tours of the synagogue. A permanent exhibition designed by the then district archivist Wolfram Angerbauer shows the history of the Heilbronn Jews in five rooms. The situation of the Jews in the Middle Ages is illustrated in the former classroom on the ground floor , with various maps showing the locations of Jewish life in Heilbronn and the surrounding area. The former meeting and guest room is dedicated to the topic of rural protective Jewry . On the upper floor, in the room next to the kitchen, the legal emancipation of Heilbronn Jews after the French Revolution is discussed. On the women's gallery there is information about the synagogue construction in the 19th century . In the former living room of the synagogue building the disenfranchisement, persecution and murder of Jews in the Nazi state is dealt with. The former bedroom of the synagogue building houses the exhibition section on Jewish personalities . In the former synagogue room, the focus is on religious life .