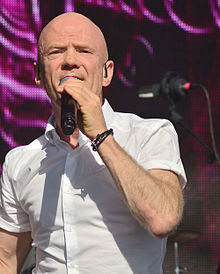 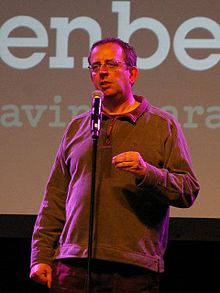 The Communards was a British pop duo founded in 1985. The formation, consisting of singer Jimmy Somerville and keyboardist Richard Coles , entered the international charts with eight different songs . Although most of the hits come from their own pen, the duo had the greatest success with the cover songs Don't Leave Me This Way (1986) and Never Can Say Goodbye (1987).

After leaving Bronski Beat in the spring of 1985, Somerville founded the duo The Committee together with the classically trained pianist Richard Coles. When another band claimed the naming rights for themselves, the name was changed to The Communards. Initially, the two musicians performed mainly for the benefit of homosexual support groups .

The first single You Are My World , which appeared in October 1985, was boycotted by the BBC and therefore only placed 30th in the UK charts . This was followed by appearances as opening act on the tours of Billy Bragg and The Style Council . The second single Disenchanted , which was released in May 1986, had only moderate success and reached number 29 on the British charts. In July of that year, the debut album , named after the band, followed , which at first could only be placed in the middle of the chart and, like the first two singles, just climbed the top 30.

Only after The Communards had their final breakthrough with the third release Don't Leave Me This Way , published in August 1986 , the original of which is by Harold Melvin and the Blue Notes from 1975, the album also rose to the British Top 10 , reached number seven there and received a platinum record . The single was meanwhile the number one hit in the UK , placed in the top 10 in Germany and Switzerland . The song also rose to the top position in the US dance charts, the Billboard Dance Music / Club Play Singles .

So Cold the Night , another release from the album Communards , hit stores in November 1986 and was able to build on the success of its predecessor. Top 10 placements in Great Britain and Switzerland made the song the duo's third most successful single to date. In February 1987, Somerville and Coles tried their luck again with the title You Are My World . The newly mixed version, like the original from 1985, missed the top 20 of the UK charts.

The harbinger of Communards' second album, the single Tomorrow , made it to the top 30 in Germany, Switzerland and the UK. The long player called Red , which was released in October, climbed to number four in the British charts and, like its predecessor, was in the Home awarded platinum. With the release Never Can Say Goodbye , a cover version of the hit of the Jackson Five from 1971, which was released almost at the same time, the duo continued the success of Don't Leave Me This Way . The song was placed in the German, Austrian and British top 10.

Another small hit was the song For a Friend , released as a single in February 1988 , written by Somerville and Coles for their close friend Mark Ashton, who had died of AIDS . There's More to Love , also from the album Red , made it into the middle of the German and English charts one last time.

In 1988 the band broke up after a violent argument during the European tour. Jimmy Somerville later began a solo career and had success with the cover songs You Make Me Feel (Mighty Real) and To Love Somebody , among others . Richard Coles became a journalist for The Times Literary Supplement and The Catholic Herald, received his Church of England training to be a priest , was pastor in St Paul’s and Knightsbridge in London, and chaplain at the Royal Academy of Music .