The USS New Orleans (LPH-11) was the Iwo Jima class belonging amphibious assault ship of the US Navy , which was made in November 1968 in service. In its active career, the ship was involved in missions in the Vietnam War and the Second Gulf War . The New Orleans remained in service until October 1997, then was in the reserve fleet and was sunk as a target ship off Kaua'i in July 2010 . 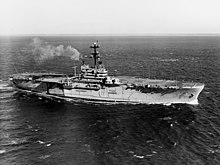 The New Orleans shortly after commissioning in December 1968

The New Orleans was laid down in the Philadelphia Naval Shipyard on March 1, 1966 and launched on February 33, 1968. The commissioning took place on November 16, 1968 under the command of Captain GM Even. The ship was named after the Battle of New Orleans .

The New Orleans experienced its first active war mission in Vietnam as the flagship of the Amphibious Ready Group Bravo in August 1969. The main task was the landing of troops and helicopter units on the coast of Vietnam. The ship's use there ended in March 1970.

After training maneuvers in the South China Sea , the New Orleans became the flagship of the commander of the First Fleet in August 1970 and was present as such during Richard Nixon's visit to Puerto Vallarta . On February 9, 1971, the ship recovered the Apollo 14 astronauts Alan Shepard , Stuart Roosa and Edgar Mitchell , whose space capsule landed about 900 nautical miles off American Samoa .

After further training missions and a long stay in the shipyard, the New Orleans took part as the flagship of Task Force 76 in relief operations for flood victims in the Philippines , for which she received the Philippine Presidential Unit Citation. In September 1973 the ship took part in the rescue operations for Skylab 3 and in February 1974 for Skylab 4 . On July 24th, it was present at the rescue of the Apollo Soyuz astronauts Tom Stafford , Deke Slayton and Vance D. Brand .

In 1980 New Orleans was present for several months during the hostage-taking of Tehran in the Indian Ocean . In the years that followed, the ship took part in several training missions, including the first landing mission on Iwojima since World War II in 1984. In 1986, the New Orleans served as an auxiliary ship for Ronald Reagan's visit to Bali .

In January 1990 the ship was moved to the Persian Gulf . There it took part from December 1990 to August 1991 in operations in Operation Desert Storm and Desert Shield. It then returned to the United States. In September 1993, the New Orleans participated as a unit of the Unified Task Force in relief operations in Somalia . 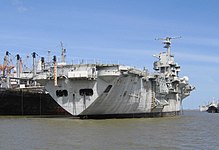 In November 1994, the New Orleans was used as the location for the film Apollo 13 . She represented her sister ship USS Iwo Jima (LPH-2) , which was already decommissioned at this time and was therefore not available for filming. In addition to the main actors Tom Hanks , Kevin Bacon and Bill Paxton , the director Ron Howard and the astronaut Jim Lovell , who acted as a consultant for the shooting, were also present on board.

The New Orleans was decommissioned on October 31, 1997 and transferred to the reserve fleet in Suisun Bay . The deletion from the Naval Vessel Register took place on October 23, 1998. Efforts to preserve the ship as a museum ship in Long Beach were unsuccessful. After the New Orleans was originally supposed to be scrapped, she was sunk on July 10, 2010 as part of the RIMPAC multinational maneuver seventy miles northwest of Kaua'i.