The elm family (Ulmaceae) are a family in the order of the rose-like (Rosales) within the flowering plants (Magnoliopsida). The approximately seven genera and approximately 35 species are mainly distributed in the northern hemisphere . Some species are used as ornamental plants and some use wood . 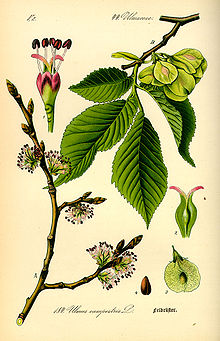 They are rarely evergreen or mostly deciduous, mostly trees , rarely bushes . The alternate and usually two-line arranged on the branches, stalked leaves have an asymmetrical leaf blade at the base with a strongly serrated leaf edge. Stipules are present.

The flowers stand individually or in several groups in differently structured inflorescences. The flowers are hermaphroditic or unisexual. There are (two to) five (to nine) free bracts . The (two to) four to eight (to fifteen) fertile stamens are free from each other. Usually two, rarely three carpels are a top permanent ovary grown. The pollination is carried by the wind ( anemophily ).

The winged nut fruits , also called wing nuts or samara, are split fruits , whereby the ovary consists of two carpels that separate when the fruit ripens. The diaspores spread through the wind:

The species have their areas mainly in the moderate latitudes of the northern hemisphere .

Branch with Samara from Holoptelea integrifolia 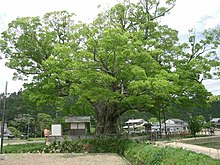 For a long time, the Ulmaceae family consisted only of the two subfamilies Celtidoideae and Ulmoideae within one order Urticales. Molecular genetic studies showed that the six or seven families and 2600 species of the earlier order Urticales also belong to the order Rosales . It turned out that the subfamily Celtidoideae with the genera Aphananthe , Celtis , Gironniera , Pteroceltis and Trema are not closely related to the subfamily Ulmoideae. Instead of the Ulmaceae, the genera of the Celtidoideae belong to the Cannabaceae.

In the Ulmaceae family today there are only seven genera with around 35 species :