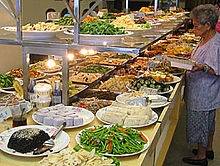 Buffet in a vegetarian restaurant in Taiwan

The vegetarian cuisine means a diet and its food that, with the exception of dairy products , eggs and possibly honey , deliberately avoided animal foods. While the ideological term vegetarianism as such only emerged in England in the 19th century, similar diets have existed for much longer. In addition to individual values, food taboos and nutrition and health teachings, they also go back to the guidelines of religions and religious directions that promote the renunciation of meat permanently or temporarily.

The adjective vegetarian is also used to describe traditional dishes that have been changed by omitting animal products or using various meat substitute products .

In the strictly vegetarian or vegan cuisine , all products of animal origin are left out. Vegans try to get along as far as possible without animal products in their lifestyle. The health effects of such a diet are controversial.

In addition to health and ethical-moral causes, according to Albert Wirz , the trend towards vegetarianism even before the First World War was a reaction to the upheavals caused by industrialization and globalization at the time. In addition to a frequent rejection of meat, different types of preparation were also propagated, for example in the various nutritional teachings of raw food or whole foods . In the sense of Pierre Bourdieu's main work The Subtle Differences , taste preferences are used as a cultural and social means of distinguishing different social groups. Modern vegetarianism was based on parts of the upper classes who, popularly mocked as " kohlrabi apostles ", combined ideas of food and the body with a general criticism of civilization and approaches to a broad reform of life . The German-speaking area played an important role in this. The International Vegetarian Union (IVU) was founded in Dresden in 1908 . The German Vegetarian Association , founded in 1867 in Nordhausen, Thuringia , is the second oldest vegetarian association in the world.

According to Peter Brang , vegetarian cuisine, corresponding restaurants and associations also played an important political role in Tsarist Russia, since a vegetarian way of life modeled on Tolstoy was considered a hallmark of the intellectual political opposition. The old Russian cuisine already made a distinction between meat and vegetables as well as fasting (vegetarian, mushrooms and fish) and festive dishes (meat, butter, eggs, milk) and had a large number of dishes suitable for vegetarians.

Classic representatives of German-speaking cuisine warn against designing vegetarian dishes as "malnutrition". Many southern German traditional vegetarian main dishes go back to the custom of offering a meatless main course during Lent and on fasting days. The combination of starchy foods such as potatoes and flour together with cheese and eggs as a source of protein instead of meat, such as in cheese fondue , Kässpätzle , vegetarian baked goods or Gaisburger March and dishes , is also popular and recommended .

The modern vegetarian kitchen differs from the traditional meat kitchen not only in the ingredients, but also set itself apart from a meatless and fasting kitchen early on through different methods of preparation and presentation. Restaurants that only offer strictly vegetarian or purely vegan cuisine are still not very common in Germany. Corresponding chefs like Chad Sarno are less interested in simply replacing animal products with others, but rather pay special attention to a u. a. The preparation based on molecular cuisine, which is intended to particularly enhance the taste experience.

→ Main article : "Forms of veganism" in the article Veganism

Vegetarian board meal for an airline

Diverse national cuisines such as Italian cuisine also have a number of dishes that are adaptable or suitable for vegetarians. Here are antipasti , pastas and pizzas just as a starter in a full menu sequence as they are served in vegetarian cuisine as well as the simple food and everyday cooking as a stand-up main courses.

Similarly, a large number of meatless dishes, starters and vegetable preparations from the Asian kitchens and in the oriental kitchens are adapted to the needs of vegetarians. Such dishes from the vegetarian cuisine can increasingly be found as a section in the classic menu cards.

An interest in high-quality vegetarian cuisine as well as high demands is expressed in the appearance of some vegetarian restaurants in German restaurant guides such as the Schlemmer Atlas . In top gastronomy, with the exception of a few pioneers such as Alain Passard , Rolf Hiltl and Pietro Leemann, top vegetarian chefs and their restaurants are almost not represented.

On long-haul flights, a vegetarian dish is often, but not always, part of the plane meal in addition to traditional meat dishes . Likewise, some armies offer military catering packages ( one-man packages ) for vegetarians.

In communal catering, vegetarian cuisine has the advantage that it does not fully comply with religious dietary regulations , but forms a kind of common denominator.

A piece of seitan

Some plant-based foods are particularly suitable as meat substitutes. In addition to types of mushrooms such as Krause Glucke, this also includes types of cabbage and beet, which can be prepared as a full main course. Adaptations of specialties from German and Austrian cuisine include vegetarian schnitzel made from yacon , turnips and celery, as well as stew dishes such as vegetarian turnip stew . The fruits of the jackfruit tree also serve as a meat substitute.

In East and Southeast Asia, tofu and other soy products such as miso and yuba were traditionally used as a source of protein, condiments, cheese and meat substitutes. Different preparation forms such as tofu fried sausages, patties or soy milk or smoked products are available ready-made. Seitan and polenta preparations make it possible to replace meat with grain products of a similar consistency. Protein-rich legumes such as lentils , beans and peas and yeast products are also used as meat substitutes for spreads because, like meat, they contain high amounts of protein .