Yeast extract is a concentrate of the soluble ingredients of yeast cells . It is a brown paste or a spray - dried yellow-brownish, water-soluble powder. Yeast extract contains a high proportion of proteins , amino acids and vitamins of the B group . It doesn't taste like yeast, but rather has a spicy taste similar to meat broth ( umami ), and is used as a spread , seasoning and flavor enhancer and, similar to nutritional yeast , in health nutrition . Sometimes spices or table salt are added to the yeast extract .

For the production of yeast extract, one mainly uses protein-rich, specially grown yeast breeds (pure yeast), especially baker's yeast and torula , but also brewer's yeast from the brewery, whey and fodder yeast . The disruption of the cells and the associated release of the cell sap is usually carried out by autolysis , i.e. the self-dissolution of dead yeast cells. The yeast's own proteases and hydrolases then hydrolyze the cell contents, whereby proteins are broken down into peptides and amino acids , DNA and RNA into nucleotides . In order to achieve a higher nucleotide content, the yeast's own enzymes can be supplemented by adding nucleases . This may, among other reasons be desirable because the ribonucleotides guanosinic and inosinic acid and its salts multiply the taste-enhancing effect of the yeast extract.

In addition to autolysis, the cell contents can also be released by thermolysis , with the yeast cells being heated in water, or by plasmolysis with hypertonic saline or sugar solution. The processes are also combined, for example in that the autolysis is supported by "melting" the cell membranes at moderate heat. In principle, acid hydrolytic extraction with hydrochloric acid is also possible (instead of enzymatic hydrolysis), but then the result must not be called yeast extract.

The initially liquid car or hydrolyzate is subsequently freed from the insoluble cell components, filtered, concentrated and, if necessary, spray-dried, so that a dry matter content of 70-80% for pasty yeast extract and 95-97% for powder is achieved.

As an example, the composition of autolytically obtained, spray-dried, salt-free yeast extract with a crude protein content (this is a comprehensive term for the nitrogenous compounds) of 70% is shown. Among the amino acids it contains, glutamic acid is the most important in terms of quantity; the proportions of amino acids in the dry matter are as follows.

Like yeast, yeast extract is relatively rich in vitamins of the B group , which are contained in the following quantities in the product named as an example.

Yeast extract has a hearty taste and a pronounced flavor enhancing effect. For this reason, it is mainly used as a seasoning ingredient in the industrial production of foods such as sauces , soups or ready-made meals , and to a lesser extent in the home . On the list of ingredients it can be declared as "yeast extract" or " aroma " , it is not a food additive in the sense of the German Additives Traffic Ordinance .

Lettering on a packet of soup that is seasoned with yeast extract.

The inherent taste and the strengthening effect are based on the content of amino acids, peptides and nucleotides, in particular glutamic acid , guanylic acid and inosinic acid . These can also be added directly to a food, usually in the form of sodium or potassium salts, but must then be listed in the list of ingredients in accordance with Annex VII of the Food Information Ordinance , previously Section 6 (4) No. 2 LMKV , with the addition "flavor enhancer" . Yeast extract has the advantage for the manufacturer that he can do without this unattractive declaration. He is even allowed to do so-called clean labeling and expressly advertise not to use any flavor enhancers. 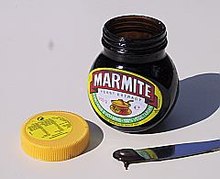 A spread based on yeast extract.

Yeast extract is used as the main ingredient in various spreads, usually with the addition of salt, plant extracts and other spices. These include the English Marmite and the Swiss Cenovis . In Germany, a salted yeast extract called "Vitam-R" is one of the oldest offers in health food stores.

Like yeast, yeast extract is rich in vitamins B 1 , B 2 , B 3 , niacin, biotin, folic acid and pantothenic acid; for this reason it is also used in the feeding of the sick. However, it does not naturally contain any vitamin B 12 . Some products contain artificially added vitamin B 12 and are then suitable as dietary supplements, for example in a strictly vegan lifestyle. However, this does not apply to all yeast extracts, so in case of doubt the manufacturer's instructions must be observed.

Yeast extract is high in purines and should therefore be avoided by people with elevated uric acid levels or gout .

In biological and pharmaceutical practice, yeast extract has found several other uses: