The following important information is missing from this article or section:
Transport, economy
Help Wikipedia by researching and pasting it . 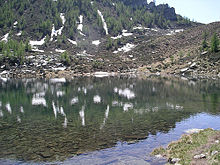 Description: The shield is divided twice. Above in gold a black eagle , in the middle black field two golden oblique links and below in silver a green three-mountain .

Vergeletto lies together with Gresso in the uppermost part of a side valley of the Onsernone valley , the Valle di Vergeletto, which branches off north of the Onsernone between Russo and Crana at the so-called "Ponte Oscuro". The Ribo River flows through it. West of Vergeletto there is a quarry in the valley floor.

Like the other places in the Onsernone Valley and Centovalli (up to above Ronco on Lake Langensee) in the south and up to Bosco / Gurin (without Cevio in between) in the north, Vergeletto is part of the future new National Park of Locarnese.

The village was mentioned as Vergeledo in 1681. In the Middle Ages the village belonged to the vicinia Onsernone and the squadra Russo TI ; From the Middle Ages to the beginning of the 19th century, Vergeletto was part of the Russo Squadra. The community formed in 1803 also included the hamlet of Gresso until it became independent in 1882. The parish church of Beata Vergine Annunciata was built in 1658 and expanded in 1672; In 1757 Vergeletto separated from the parish of Russo. Up to the 19th century, five mills were in operation, which lost their importance after the road was built around 1860; one of them was restored at the beginning of the 21st century.

Vergeletto can be reached directly from Locarno with a change at Russo via PostBus.

In the hamlet of Zott , west of Vergeletto, which can sometimes also be reached by post bus , a small cable car (with closed cabins) leads to the Alpe Saléi viewpoint.

From the Alpe Saléi and the Capanna Alpe Salei mountain hut , various easier and more demanding hikes in all directions are possible, especially on the nearby Pizzo Zucchero or technically more difficult on the Mottone in the east and directly on the Pilone in the west, or as a longer circular hike in about halfway up to the valley floor around the first two peaks mentioned north and east to Crana in Onsernone. Another high-altitude hike leads from the Alpe Saléi at around 1700 to 1800 m above sea level in a wide arc to the west over the Alpe Arena to the Alpe di Porcarésc and then in the valley floor back to Zott and Vergeletto. To the south, Comologno and Spruga in Onsernone can be reached directly on hiking trails from Alpe Saléi .

To the west from Vergeletto and Gresso you can reach the Italian Ossola Valley via alpine passes , to the north to the Swiss side valley of Campo (Vallemaggia) or to the east directly to the Maggia Valley .