The Veste Erlangen , formerly also known as a palace , castle or house , is an abandoned tower hill castle (motte) that was located west of the old town of Erlangen in Bavaria .

The building, first mentioned in 1372 as the property of Emperor Charles IV , was the seat of the sovereign bailiff until the 16th century , but also served as a prison and in times of war as a place of refuge for the population. The fortress, which was last heavily damaged in the Thirty Years War , was torn down in 1783/84. The exact location was unknown for a long time until the remains of the well system were discovered by chance in 1981. The Bavarian State Office for the Preservation of Monuments records the "medieval and early modern findings in the area of ​​the fortress" as a ground monument under monument number D-5-6332-0188.

The complex should not be confused with the so-called Curia, a presumed farm in the area of ​​today's Adlerstrasse and Lazarettstrasse, which was given to the lower aristocratic family of Erlangen, several of whom bore the title of knight . The margravial castle , which was built in Erlangen Neustadt from 1700 onwards, has no historical connection with the fortress.

In 1361, Emperor Karl IV acquired the settlement of Großenerlang from the Bishop of Bamberg and made it a fiefdom of the Kingdom of Bohemia . Probably soon afterwards the new sovereign built the fortress, first attested in 1372, on the road leading to Alterlangen . A bailiff responsible for the administration of the acquired property resided there. It is not known whether the bailiffs in Erlangen named in 1376 and on the occasion of the granting of town charter in 1398 were identical with the bailiff who was attested as chairman of the lower court at that time . By 1528 at the latest, these were officially separate offices. After the city came to the Hohenzollerns as part of the Principality of Kulmbach (later Markgraftum Brandenburg-Bayreuth ) in 1402 , only nobles were sworn in as officials in Erlangen . The following officials are proven in Erlangen:

Ernst von Crailsheim was probably the last Erlangen bailiff. Subsequently, the Erlangen office was incorporated into the Baiersdorf office. From then on, the fortress served as a prison and refuge for the population during times of war.

In 1449 in the First Margrave War , 1461 in the Bavarian War and 1553 in the Second Margrave War , the castle complex was severely damaged. After the destruction in the Thirty Years' War in 1632, several houses were built on the burned out fortress. In 1702 there were eleven small houses next to the old town school. The building survived the fire in the old town in 1706. In 1770, however, it had become so dilapidated that only poor people and a night watchman lived in the gatehouse in the 16 buildings . In 1783/84 the ruin, threatened by collapse, was torn down by three master masons who paid 400 guilders for the stones . The moat and the earth wall were completely leveled.

The ruins of the fortress Erlangen from the south, around 1765 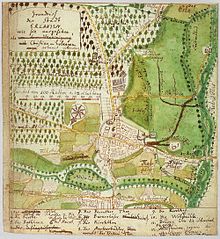 Floor plan of Erlangen's old town before the new town was founded in 1686, reconstruction around 1774/1778. The fortress, here referred to as the “castle”, is located to the right of the old town (south above!). You can also see the "arm of the brook Röthelheim, which is no longer".

For the reconstruction of the fortress Erlangen, of which nothing can be seen today, only inaccurate depictions and city maps from the 16th to 18th centuries are available. It is assumed that it was a square system with an external length of around 30 meters. The originally artificial earth wall around the moth was only later replaced by a slope up to four meters thick and almost 10 meters high. In the middle of the fortress was a three-storey residential tower with a floor area of ​​approx. 13 x 10 meters, under which the cellar and vaults lay. The houses shown in the later images were only built after the Thirty Years War. Access via the approximately 10-meter-wide moat fed by an arm of the Röthelheimgraben was via a drawbridge and a gatehouse on the east side. The forecourt was originally only secured by a fence and was only enclosed by the city wall, which was moved to the west, from 1769.

In 1981, during construction work on the Fuchsengarten 5 property, the remains of the fortress' well, originally around 14 meters deep, were found . When the find was subsequently documented, three sandstone cuboid layers of the well tube with a total depth of 1.5 meters were still present. The most striking finds in the well shaft include fragments of a stove tile, other tile fragments, a tobacco pipe, parts of a plate in imitation faience and two sandstone blocks from the above-ground fountain setting. The finds indicated that the well was functional until the fortress was finally demolished. A basal wooden ring was also recovered from under the deepest stone blocks at the bottom of the well, with the help of which the well shaft was excavated. A dendrochronological examination revealed that the wooden ring was made from a fir tree felled in 1710. The construction or the expansion of the fountain therefore falls into the last phase in which the fortress was permanently inhabited.

The location of the fortress on the plots of the row of houses on the left edge of the picture, 2012

The fortress Erlangen was located outside the city wall of the old town, on what is now the Fuchsengarten 5 site. In the immediate vicinity, a 5.80 meter high pin and a plaque embedded in the ground remind of the former building. The work of art was designed by Isolde Kunath in 2002. It is part of the monument objects project , which was realized on the occasion of the 1000th anniversary of the city of Erlangen and which points to monuments that no longer exist in Erlangen at a total of 16 locations. 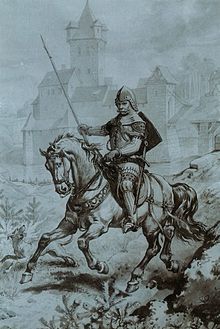 Historically incorrect representation "Knight Berthold and his castle Erlangen 1381" , photograph (around 1890) after a lost glass painting

At the house at Pfarrstrasse 19, at the corner of Fuchsengarten, a memorial plaque attached in 1855 reminds of the castle. However, the text on this board is historically incorrect, as the complex is referred to as the "Castle of the Knights of Erlangen", built in 1046. In fact, there was a so-called Curia in the place, a court that was probably built in the 12th or 13th century. This was awarded as a fiefdom of the Reichsministeriale von Gründlach (later the Lords von Hohenlohe-Brauneck ) to the lower noble family of Erlangen, several of whom bore the title of knight. For a long time, the Curia was assumed to be on the property at Bayreuther Straße 8, but according to today's knowledge it was located in the Adlerstraße and Lazarettstraße area. There was no such thing as an Erlangen royal court , as historians assumed in the 20th century. A glass painting, now lost, showing the knight Berthold von Erlangen in front of “his” castle, can be traced back to the earlier romanticizing ideas about the importance of Erlangen in the Middle Ages and does not correspond to historical events.