In 1899, the Dresden architects Schilling & Graebner bought the large Altfriedstein winery in what is now the Niederlößnitz district of Radebeul and developed the site by creating roads and parceling the abandoned vineyards into the Altfriedstein villa colony . To do this, they tore down the west wing of the manor house and all the outbuildings of the winery and redesigned the west gable of the remaining central building. Among other things, they built a pedestrian passage through the corner of the building on the ground floor. From 1902 until the First World War they built numerous villas and country houses in the area, many of them in the style of reform architecture . The most important villa in the villa colony is the Meyerburg , which forms the end to the north and was built in 1911 .

Signet of the Altfriedstein villa colony, 1903

Altfriedstein villa colony in 1914, before that the Bussard sparkling wine cellar . Above the airship LZ 17 "Saxony"

As a result of the phylloxera disaster in the 1880s, the areas of the approximately 12 hectare vineyard estate around the Altfriedstein mansion had also been abandoned. In 1899, the Dresden architects Schilling & Graebner acquired the entire area in order to develop a country house and villa colony there for “good to upper class demands”.

The streets opening up the site were based on the urban planning concepts common at the time, but were also largely subject to the framework conditions of the very steep terrain of the former steep slopes. The upper Ludwig-Richter-Allee, opening up the area from the south, cut through the structure of the manor house. Instead of tearing it down, the architects campaigned for extensive maintenance and only tore down the west wing in 1902, giving the building a new west gable and an arbor-like passage through the north-west corner of the structure.

Schilling & Graebner built so-called lead buildings at their own expense, which were offered to potential customers as finished villas, and they also created villa and country house designs for other properties in accordance with the quality maintained in their office. Since the project was not a great commercial success, despite support from the rural community of Niederlößnitz, and the architects in several cases remained the owners of the villas that were only rented out for a long time, from 1905 plots were sold to private builders without any contractual commitment to the preliminary designs or to the architectural office .

For this purpose, the Dresden villa construction company Neubert & Co. was founded in equal parts by Schilling and Graebner and Friedrich Moritz Alexander Neubert (a Dresden-based brother of Schilling's stepmother and consul of the Dominican Republic ) in October 1905 . When Neubert left the marketing company, Schilling and Graebner converted it from an open trading company into a limited partnership . The Leipzig chemistry professor Arthur Hantzsch , who was Schilling's brother-in-law in his first marriage, became a limited partner .

The currently small number of buildings not by Schilling & Graebner that are under monument protection shows the often lower architectural quality of the houses designed by other architects.

In the years up to the First World War, 23 residential buildings were built on the 95 parcels of the area, 15 of which came from the office of Schilling & Graebner, including the eight leading buildings erected at the beginning, rather in the lower area. The Altfriedstein villa colony thus represents the largest coherent ensemble of free-standing buildings of this architectural office. The area, which is now about 85 parcels, is built on with about 58 buildings, including 17 monuments, and numerous ancillary buildings.

The area of ​​the villa colony consists of the following addresses today: south side of Mohrenstrasse , nos. 1–5; Altfriedstein ; Prof. Wilhelm Ring; upper Ludwig-Richter-Allee from No. 24; Lindenaustraße, on the east side only up to No. 6. On this area, next to the Altfriedstein manor, there was also the listed winegrower's house of the former Beuhn's estate , diagonally across from the Lotter , dating from around 1800 .

Passage to Planstraße E : stairway connection Altfriedstein, in the arch the keystone from 1903

The development of the area took place in the upper area due to the very steep terrain along the slope. The villa colony final in northern ravine on the border with Mohr House -Property meets in the northeast with the Moritzburger road . From this confluence, the plan road A was relocated below the hilltop in order to develop the higher-lying properties to the west, which are "better" because of the view. The original plan to run the street to the south and then to the east in the lower area had to be abandoned because of the too steep central section, so that the plan street A ended in a turning hammer diagonally below the Mätressenschlösschen . The Planstraße A built 1909/1910 and in July 1910 as Altfriedstein named. The existing northern ravine was expanded in 1910 and renamed Mohrenstrasse in October 1911 .

The lower part of the former vineyard area was also developed from Moritzburger Straße: from the entrance to the Altfriedstein mansion there, Planstrasse B ran roughly parallel to Planstrasse A along the slope through the courtyard north of the manor house. Instead of the west wing of the mansion that was to be demolished, the confluence with Planstrasse C coming from the south was created , the extension of Alleestrasse (today Ludwig-Richter-Allee). From this confluence, the plan road B followed the topography of the terrain to the southwest corner, where it also got a turning hammer. From this turning area from which ran Planstraße D parallel to the southern border through an intersection with the Planstraße C to Planstraße O . This street also began in the north at the confluence of Planstrasse B with Moritzburger Strasse and then ran parallel to Planstrasse C on an existing path to the south to Mittlere Berg-Strasse (today Winzerstrasse).

The latter roads were built between 1901 and 1903 and transferred to the Niederlößnitz municipality in February 1903. The naming was as Brühlstrasse after the former Altfriedstein owner Heinrich von Brühl ( Planstrasse B , today the upper part of Prof. Wilhelm Ring ), Lamsbachstrasse after the Altfriedstein owner and community elder Carl Lamsbach ( Planstrasse D , today the lower part of Prof. Wilhelm Ring ). Rings), Lindenaustraße ( Planstraße O ), and Planstraße C became an extension of the existing Alleestraße , today Ludwig-Richter-Allee.

After 1912, a small park was created on the pointed corner property east of the turning hammer of Prof. Wilhelm Ring. On the northern edge, in addition to a retaining wall, because of the sloping terrain, this was given a well system consisting of a basin with a water trough and a water outlet from the retaining wall. The well system was renovated in 2009 and put back into operation.

In 2011, thanks in part to generous donations, the renovation of the fountain system and the redesign of the park were honored with the client's award from the city of Radebeul .

The newly created west gable of Altfriedstein with arched passage 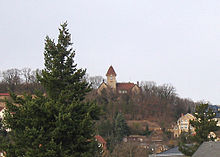 The Meyerburg high above the villa colony

Other buildings there by Schilling & Graebner