Referendum in Carinthia in 1920 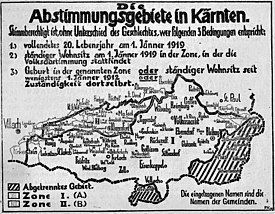 The 1920 referendum in Carinthia ( Slovenian: Koroški plebiscit - "Carinthian referendum") was one of the referendums following the Treaty of Saint-Germain . It was supposed to decide on the state affiliation of the areas in southeast Carinthia claimed by Yugoslavia after the First World War and predominantly inhabited by Slovenes .

The allied commission to monitor the referendum

"On October 10th, the suffering of the Slovenes under the terror of the Germans and renegades ends !"

A Slovenian sticker with the inscription: "Tear up the white ballot, otherwise you will tear up your homeland!"

After Carinthia had declared its accession to the Republic of German Austria through its constitution of 1918 , troops of the State of Serbs, Croats and Slovenes (SHS State) invaded the south-eastern parts of the country on November 5, 1918 . The SHS police advanced into the Rosen and lower Gail valley . Ferlach and the north of the Drava located Völkermarkt were occupied. In view of this threat, the state government moved its seat to Spittal an der Drau .

On December 5, 1918, the provisional Carinthian provincial government under the provincial administrator Arthur Lemisch decided - without the support of the Viennese government and even against its will - to armed resistance against further advance of the SHS troops. The fight, also known as the Carinthian defensive battle , began in the Gailtal with the recapture of Arnoldstein on January 5, 1919, an advance against the Rosental and the recapture of Ferlach . An armistice was signed on January 14th; a US commission (the so-called "Miles Mission", named after its head Lt. Col. Sherman Miles ) studied the disputed territorial issues on site. By May 7, 1919, all but the areas evacuated according to the armistice agreement were appalled.

The 1919 Peace Treaty of St. Germain provided for a referendum in Southern Carinthia; Without a vote, the Canal Valley Italy and the Mießen Valley , Unterdrauburg and the municipality of Seeland (Kankertal) were added to the SHS Kingdom and are now part of Slovenia . After a referendum was passed, Yugoslavia tried again to create a fait accompli by force of arms. Regular troops under the command of General Rudolf Maister crossed the border on May 28, 1919 and occupied Klagenfurt on June 6 , which they had to vacate again at the request of the Supreme Council of the Allies in Paris. From then on there was no further fighting. Until September 13, 1920, shortly before the referendum, the southern "Zone A" was occupied by troops of the SHS state and remained under SHS control until after the referendum, while the northern "Zone B" remained under Austrian control. If “Zone A” had decided to join the SHS Reich, “Zone B” (which also included Klagenfurt) would have had to vote.

On October 10, 1920, a referendum took place in the border area of ​​southern Carinthia, in which the Slovene-speaking ethnic group made up around 70% of the total population: 59.04% of all votes went to Austria. The result showed that a significant part (around 40%) of the Carinthian Slovenes had voted to stay with Austria. The approval of affiliation with the SHS state tended to be stronger in the southern municipalities bordering Slovenia than in the northern municipalities.

Results of the referendum by municipality

The Slovenes' vote for Austria is primarily due to the traditional social, cultural and economic ties within the historically grown borders of Carinthia. Klagenfurt was also the economic and infrastructural center for "Zone A". The demarcation of the border sought by Yugoslavia saw sales markets endangered and families threatened with separation. Beliefs and mentality differences, the democratic form of government in Austria and its higher level of development and prosperity, as well as the commitments regarding the protection of minorities also played a role.

A Slovenian sticker with the inscription: "Klagenfurt belongs to us!"

After the referendum, the SHS state tried again to occupy Carinthia, but had to withdraw its troops from Carinthia after a categorical request from the ambassadors' conference in Paris on October 16, 1920 and subsequent demarches of similar content by Great Britain , France and Italy . There were also vigorous protests from the Vienna Foreign Office. On November 18, 1920, "Zone A" came back under Austrian administration. On November 22nd, 1920, the voting area returned to Austria's sovereignty .

October 10th is a public holiday in Carinthia, which is not generally a non-working day . Schools, offices and authorities are closed on these days.

The referendum of October 10, 1920 is one of the few cases of democratic expression of the right of peoples to self-determination proclaimed by Woodrow Wilson after 1918. However, the promise made by the Carinthian National Assembly about two weeks before the referendum ensures that the “linguistic and national character [of the Slovenes] now and all time ”, to this day for controversies such as the street sign dispute .