A flyby is a flight of a probe that explores a planet or another celestial body without entering its orbit or significantly changing its trajectory due to the gravitation of the celestial body. The transition to swing-by , where this influence is desired, is fluid, but flyby is also a generic term for both types of maneuver.

A flyby probe is a space probe that flies past one or more celestial bodies and collects data about the object passed. Flyby probes are technically and energetically cheaper than orbiters that enter orbit around a celestial body. The scientific results are less due to the flyby, which only takes a few hours to days, than with an orbiter that observes the celestial body for months or years from an orbit. Another concept of space probes are landers that land on a celestial body in order to carry out research there. 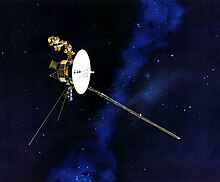 If, with appropriate control of a spacecraft, the gravity field of a celestial body is used to change its course in a targeted manner and to increase or decrease its speed , this is called swing-by.

Fly by the moon

In the early years of space travel , flying past the moon or the Earth's neighboring planets was the only way to remotely sense other celestial bodies. The accuracy and reliability of the control of a spacecraft determines the minimum distance that can be achieved. The burnout speed of the early launch vehicles could not yet be maintained as precisely as would have been necessary for close pass-by flights. With the increasing precision of the take-off, the direct approach to the moon for the purpose of a hard landing came into the realm of possibility.

The first successful flybys of the Earth's moon were those of the Soviet lunar probe Lunik 1 on January 2, 1959 at a distance of 6,000 km from the moon and the American Pioneer 4 on March 4, 1959 at a distance of 60,000 km. These missions were preceded by a total of seven false starts between August and December 1958. Both probes carried out radiation and particle measurements between the earth and the moon and became artificial planets of the sun after the passage through the moon. Lunik 1 was able to prove the predicted existence of the solar wind .

The sixth Soviet lunar probe Lunik 2 , on September 12 and 13, 1959, hit the moon for the first time. Lunik 3 , with a flight from October 4 to 10, 1959, was able to transmit the first photos of the back of the moon by radio after the flyby and discovered the only lunar sea in this hemisphere , the Mare Moscoviense .

Flying past the two neighboring planets of the earth, Venus and Mars , require an accuracy that is one to two powers of ten higher, which can only be achieved by subsequent orbit maneuvers . Therefore, they only come after a few failures and a further two to three years of technical development. The following list is arranged chronologically: first the planets after the first flyby, then again chronologically within the sections:

See also: List of all visits to Venus (V = flyby )

See also: List of all visits to Mercury (V = flyby)

With Voyager 1 and Voyager 2 (1977 to 1979) for the first time get flybys on Jupiter and the moons of Jupiter - and after successful swing-by maneuvers the required acceleration to go to Saturn , Uranus and Neptune to go.

Fly past other celestial bodies

In 1985, the unmanned Giotto spacecraft was sent into space to study Halley's Comet . It was "ESA's first interplanetary probe and the first scientific payload on board an Ariane rocket."

Deep Impact was a mission to comet 9P / Tempel 1 launched by NASA on January 12, 2005 , during which a projectile with a mass of around 370 kg and a speed of 10.2 m / s was launched on July 4, 2005 by the probe hit the surface of the comet. The effects of the impact were observed by the probe, space telescopes, and telescopes on Earth. Examination of the material thrown up and the impact crater should increase understanding of the structure and formation of comets and the solar system .

In the combined, extended mission EPOXI (Extrasolar Planet Observation / eXtended Investigation of comets), the Deep Impact spacecraft explored the core of Comet 103P / Hartley 2 (formerly P / Hartley 2) during a flyby from a distance of 700 on November 4, 2010 km. Then she observed five previously discovered extrasolar planetary systems with one of her two telescopes .