Wendelin Moosbrugger , also Wendelin Mosbrugger , (born October 20, 1760 Rehmen, district of Au, Vorarlberg ; † August 20, 1849 in Aarau , Switzerland) was a German portrait and miniature painter . He came from the Moosbrugger family, famous for their builders, plasterers and painters .

Even as a child, Wendelin Moosbrugger showed a special talent for drawing and painting. He was trained in Constance and initially worked as a "carpenter". The elector in Mannheim brought him to the academy to let him study further. He was based in Constance from 1794, but also worked in Karlsruhe and Vienna as well as for the court in Stuttgart ; in Cologne royal, princely and private people sat as models for him. However, the political times were also favorable for a court portraitist. The German princes, who were elevated to kings by Napoleon, wanted to be immortalized with brush and paint, so he portrayed King Friedrich I of Württemberg with his wife and Napoleon's brother Jérome, King of Westphalia. King Friedrich appointed Wendelin Moosbrugger as a royal portrait court painter in 1810.

Wendelin Moosbrugger manufactured a. a. the altarpieces in his birthplace Rehmen.

Wendelin came from the marriage of the miller Leopold Moosbrugger from Rehmen and Anna Katharina geb. Charcoal burner. His first wife Anna Schärtker von Arbon from Thurgau, whom he married in 1795, died almost two years later giving birth to their son Leopold Moosbrugger (1796–1864), who later became known as a mathematician.

Wendelin then married Anna Maria Huetlin from Constanz (1774–1829) in 1802. From this marriage eleven children were born, u. a. 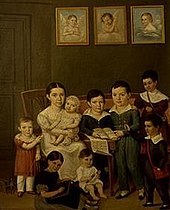 The children of Joseph Beutter-Gehring (1831)

Wendelin Moosbrugger, appointed royal portrait court painter by King Friedrich von Württemberg, made a name for himself with his subtle and psychological portraits. Their sober, factual description clearly set them apart from the pathos and idealizing elegance of courtly portrait painting. The realism of the portrait of his second wife, Anna Maria, geb. Hüetlin (1774–1829), in which he did not shy away from reproducing the beginning aging of her face.