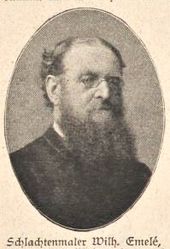 Wilhelm Emelé was the son of an innkeeper from Buchen. He first attended the war school in Karlsruhe , but left it and went to Munich in 1851 to the art academy , where he was supported by Moritz von Schwind and a student of Feodor Dietz , who also came from the Odenwald in Baden .

He had his first artistic success with his picture Battle of Stockach , which he painted on behalf of Prince Karl Egon II of Fürstenberg . The city of Heidelberg then commissioned him to depict the bridge storm at Heidelberg in 1799 .

Study trips then took the painter to Antwerp and Paris , and he had successful exhibitions in Prague and Vienna . The subject of his art was initially monumental pictures with battles from the time of the Thirty Years War up to the 19th century, which testify to a precise knowledge of the military details, are lively characterized and rich in appealing motifs. Wealthy and well-known clients made Wilhelm Emelé an important and wealthy painter of his time.

In 1861 he went to Vienna , where he continued his education in horse painting and painted equestrian portraits and entire hunting parties. The Battle of Würzburg, painted for Archduke Albrecht, on Sept. 3, 1796, is one of his larger works in Vienna . For the painting of a cavalry battle from 1866 he received the art medal at the Vienna World Exhibition .

At the Franco-German War , he participated as a painter of battle scenes from mid-October 1870th He painted the attack by Bonnemain's division near Elsasshausen on August 6, 1870, the battle near Nuits on December 18, 1870 ( Grand Ducal Gallery in Karlsruhe ), the storming of the Nuits station , the Baden artillery in the battle before Dijon and others.

After the end of the war in 1871, Emelé settled in Karlsruhe, where he created further pictures depicting the previous war. From 1876 he was back in Munich, where he painted genre scenes and pictures from equestrian life in the 17th and 18th centuries. An eye disease increasingly prevented him from practicing his art in old age. He died almost blind in 1905 in Freiburg im Breisgau.