William "Bill" Frew Train was the second oldest of five children of William Frew Train and his wife Edith Stillwell Train, who died in 1918. After his father died in 1925, the children became orphans. He joined in 1926 as a private first class (private) in the US Army and began in 1926 as an officer training at the US Military Academy in West Point . Once finished, he was in 1931 as a lieutenant (Second Lieutenant) transferred to the US Army. In 1933 he became deputy commander of Camp Roosevelt in the George Washington and Jefferson National Forests , the first job creation program of the New Deal as part of the Civilian Conservation Corps . At the time of the attack on Pearl Harbor on December 7, 1941 and the entry of the United States into World War II on the following 8 December 1941, he served as captain (Captain) of the General Staff in the War Office (US Department of War) operates. 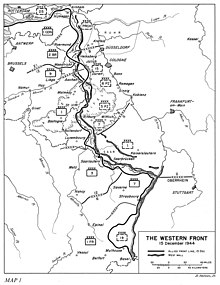 Lieutenant Colonel Train was involved in the Battle of the Bulge and the defense of Sankt Vith in southern Belgium.

This led to this division taking part in the Battle of the Bulge , which began on December 16, 1944 . He served as Lieutenant Colonel (Lieutenant Colonel) deputy commander, belonging to the 28th Infantry Division 12th Infantry Regiment, which held initially for two days despite fierce German attacks his position and then in the defense of Sankt Vith took part, an important link in southern Belgium. The defensive actions of his regiment disrupted the northern area of ​​the German attacks, which came to a standstill on December 26, 1944. Two days earlier, the regiment was surrounded by German troop units and was then able to penetrate the newly formed US lines with the remaining defenders of Sankt Vith. He was awarded the Silver Star for his military services as a troop commander and his bravery .

After the war, William F. Train found numerous other uses as an officer and staff officer. At the beginning of the Korean War , he was from 1950 to 1951 planning officer on the staff of the Eighth US Army ( Eighth US Army ) and as such for the planning of five combat missions during the Battle of Pusan Perimeter (4-5. August to 15. September 1950), which ended when the North Korean attack was canceled. After further uses was Major General (Major General) Train in June 1960 as a successor to Major General Louis W. Truman commander of the 4th Infantry Division ( 4th Infantry Division ) and remained in that post until his replacement by Major General Frederick R. Zierath in April 1962nd He himself then became the commandant of the US Army War College (USAWC) in Carlisle in 1962 and held this position until 1964.

His marriage to Charlotte Bruce Gibner Train, who died in 2011, resulted in two sons and a daughter. The eldest son, William Frew Train III, who was awarded the Purple Heart , fell as a first lieutenant on June 16, 1962 as the sixth American military advisor during the Vietnam War. After his death, General William F. Train was buried next to his eldest son in the US Military Academy Post Cemetery .

Selection of decorations, sorted based on the Order of Precedence of Military Awards :