William Fiennes, 1st Viscount Saye and Sele, was the only son of Constance Kingsmill and Richard Fiennes, 7th Baron Saye and Sele . He was born on the family estate of Broughton Castle near Banbury. Fiennes attended New College at Oxford University . In this context it should be mentioned that he was a descendant and heir of the sister of William von Wykeham , the founder of the college. After the death of his father in 1613 he became the new Baron Saye and Sele.

During the second half of the reign of James I , he was one of the most prominent actors at the court. In 1621 he acted actively against Francis Bacon and demanded that he be excluded from the nobility. But he finally lost the favor of the king himself in 1622 when he admitted that he knew no right other than that of parliament that could induce men to give up their own goods. He spent the next six months in Fleet Prison for that statement . He was then under house arrest for a while. When George Villiers, 1st Duke of Buckingham , returned from Spain and suggested breaking the Spanish Match , Villiers and Fiennes became temporary allies. Fiennes became a Viscount. At home he then went against Lionel Cranfield, 1st Earl of Middlesex .

In 1626 he was again in opposition in parliament. During this time he defended the privileges of the nobility to the new King Charles I with John Digby, 1st Earl of Bristol , and Thomas Howard, 21st Earl of Arundel , and intervened on behalf of Dudley Digges when Villiers accused him of high treason . In the autumn of 1626 he was one of those who refused to pay the forced loan . He then successfully campaigned for the right of peers to protest in parliament in 1628 . In the debates on the Petition of Right , he opposed the Court Party's reservations and amendments .

During the absolutist reign of Charles I between 1629 and 1640, Fiennes devoted his time and money to colonization endeavors. His motives were not only financial, but also religious and political: in 1630 he founded with Robert Greville, 2nd Baron Brooke , John Pym and other Puritans a Company for the purpose of settlement of Providence Iceland Colony (today Providencia in the Caribbean Sea , part of San Andrés and Providencia , a department of Colombia ). 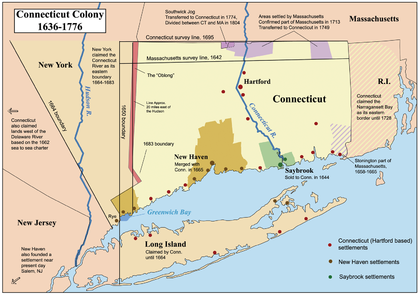 A map of the colonies of Connecticut, New Haven, and Saybrook.

Together with Greville and ten others, he received on March 19, 1632 from Robert Rich, 2nd Earl of Warwick and the New England Company a patent for a large piece of land on the Connecticut River . John Winthrop Jr. was named governor. In the further course they built a fort at the river mouth, which they named "Sayebrook" and sent a shipload of colonists there.

In 1633 Fiennes and Greville bought a plantation near Cocheco or Dover , today's New Hampshire, from some merchants in Bristol . They both considered settling in New England , but first demanded the creation of a resident nobility from which the governors would be elected. After this was rejected by the king, the partners in the colony agreed to continue to receive colonists.

As a result, Fiennes concentrated his commitment on the settlement of Providence Island, but also spread derogatory reports about New England, its climate and country. He soon gave up his ventures there and ceded his rights: in 1641 the New Hampshire settlements went to the Massachusetts Bay Colony and three years later he sold Saybrook to the Colony of Connecticut .

On November 2, 1643, the Westminster government appointed him one of the commissioners for the plantations.

Leading Puritans, including John Pym, who were all members of the Providence Island Company, met with Fiennes at Broughton Castle to coordinate their opposition to the king. On several occasions, Fiennes outwitted Charles I's advisers by strictly adhering to the legal form, which earned him the nickname "old subtlety" .

Although Fiennes spoke out against the tax, which became known as Ship Money , he was only one of two peers who accompanied Charles I on his march against the Scots in 1639. However, he refused to take the oath of allegiance "to the utmost of my power and hazard of my life" , which tied him to fight for the king. After that, Charles I tried to win his favor by calling him to the Privy Council and mastering the Court of Wards .

After the outbreak of the English Civil War in July 1642 he was appointed to the Committee of Safety and Lord Lieutenant for Gloucestershire , Oxfordshire and Cheshire . In the same year he raised an infantry regiment , which was commanded by Sir John Meldrum and later occupied Oxford . In 1644 he contributed decisively to the formation of the Committee of Both Kingdoms . He was one of only four peers in the House of Lords to support the Self-Denying Ordinance in 1645 , which led to the formation of the New Model Army .

During 1648 several treaties were negotiated between Charles I and the parliamentary majority, most recently the Treaty of Newport , aimed at ending the English Civil Wars. Fiennes and other Puritans were concerned about the terms negotiated in the last treaty as they saw an attack on their freedom of belief. Later that year Charles I was captured and charged with high treason. Charles I was found guilty and beheaded on January 30, 1649 in front of the Banqueting House in London . Fiennes then returned to private life. After the restoration of the monarchy and the coronation of Charles II as king, he sat again in the Privy Council. He died on April 14, 1662 in Broughton Castle.

The lineage of the Viscounts of Saye and Sele died out in 1781, but the barony is still continued today by the descendants of John Twisleton and his wife Elizabeth, daughter of James Fiennes, 2nd Viscount Saye and Sele.

The city Saybrook in Connecticut was named after Viscount Fiennes and Lord Brooke.