The title of this article is ambiguous. Further meanings are listed under laundry (disambiguation) .

The word laundry describes both the process of cleaning (washing) textiles in water and a specific group of washable textiles.

Laundry as a washing process

Washing clothes by the river

Jean Siméon Chardin : The Laundress (around 1735)

"Show me your feet, show me your shoes": washing day as pure manual work with 8 domestic servants of a manor ;
Photo in cabinet size , between 1880 and 1890

Laundry hangs out to dry outside. 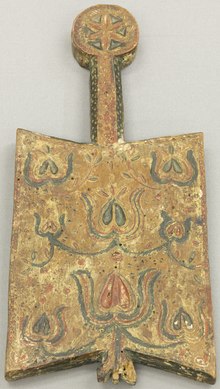 Laundry knocker, 1858, place of use: Transylvania. Stock of the MEK .

The laundry , so the process of washing of textiles , can be done in unterschiedlichster form. Washing by hand (also known as hand washing) has been almost completely replaced by machine washing, i.e. washing in washing machines , at least in the industrialized countries . Exceptions to this are i. d. Usually only hand washing of sensitive textiles. Another form of cleaning in addition to the traditional laundry today, Dry Cleaning . As a rule, a label is attached to textiles on which washing instructions are given in the form of standardized textile care symbols . They also indicate the recommended washing temperature.

The washing process has changed a lot over the past 100 years. In the first half of the 20th century, the laundry had to be soaked for up to 24 hours, boiled in large kettles and then processed by hand with various tools ( bleuel , washboard , etc.). Those who could afford it used curd or soft soap for delicate items of laundry; But as these were quite expensive, washing was done primarily with soda , which leached the laundress' hands very much. To rinse out the laundry, one often went to the stream or the water pump, as this required a lot of water and the houses often did not yet have their own water connections. Winning the laundry was also very exhausting. White laundry and items with soiling that were difficult to remove were then often bleached in the sunlight, that is, laid out on the "Bleiche", a particularly well-tended meadow, and watered several times with a watering can (in many places street names such as "Auf der Bleiche", etc.) are reminiscent of this custom. ). When exposed to sunlight, the grass develops bleaching oxygen. Because the washing was so laborious, wealthier people often only washed 2 to 3 times a year; common people often had to hold laundry days once a month because they didn't have enough laundry. In the cities there were already washhouses and laundry rooms in which one could wash with warm water. To do this, water was heated in a huge kettle, which is where the name of the laundry “kitchen” comes from. Here, too, the laundry was washed according to the same principle with soap, soda, brush, washboard and bleuel (which, with a longer handle, was also used to stir the laundry in the wash tub ). Hand washing was made easier with the laundry tamper . In the latest models, air and lye were sucked in and pushed through the laundry by a spring-loaded, sieve-like perforated part attached to the bell .

In the first washing machines, an impeller cross was driven by hand with a mechanical lever mechanism. They also didn't have a cooking device. The laundry continued to be cooked in the kettle. The clean laundry was wrung out by means of a roller wringer attached to the washing vessel in order to collect the valuable lye again in the machine. Around 1930 there were also washing machines that were powered by the line pressure via a connection to the water pipe.

The first fully automatic washing machine for private households was introduced in America in 1946. About five years later it found its way into German households. At this time, the first modern heavy-duty detergents came onto the market. The prices for this new product were still so high that only a few bought it. They were not spared the tedious scrubbing and brushing of the laundry. Since the washing machines themselves also had a high purchase price, it was common at that time to lend these devices to households for a day. This practice is still common today in poorer countries.

In the 1970s, the drum washing machine gradually gained acceptance . It made washing a lot easier. Housewives especially had their "fun" with the spin cycle of their new machine - because if the machine was not firmly anchored in the floor, the vibrations made the dishes in the cupboards "dance"; some models also made themselves independent, that is, the machine set itself in motion by the vibrations during the spinning and jerked through the room or even through parts of the house. But some housewives did not quite trust the machine. For this reason, the "porthole" was created, through which you could always keep an eye on the laundry.

Because washing has become so easy, washing is done much more frequently today, so that overall more energy, water and time is used than before. 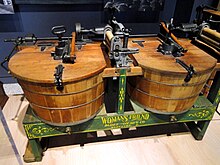 In 2009 an article published in L'Osservatore Romano became the starting point of a controversy, according to which the washing machine had contributed more to the liberation of women than chemical contraception or the increasing approval of abortion . A study by the Université de Montréal in Canada came up with similar results.

The marking of laundry items with initials or full name within a household as well as a marking that contract laundries carried out in order to be able to assign the goods to the customer was designated as a laundry mark .

Today, such machine-embroidered laundry signs are mostly used by large companies such as hospitals, hotels and the like. used. The care labels on all textiles sold today are also called laundry symbols.

Laundry as a name for textiles

With laundry and all of the washable fabrics referred, preferably underwear , table linen , bed linen , underwear , etc. As a repository of laundry is in western culture traditional and mostly still the linen closet, the linen chest or closet.

Laundry in the sense of dirty laundry, clean laundry, etc.

Textiles of different materials and different processing allow different care and washing methods. With regard to the recommended type of laundry, a distinction is made between colored laundry, whites , delicate laundry, wool laundry, etc.

Among whites was wearing fabrics that can be washed at 95 ° C understands. This helps kill microorganisms . These are mainly bed linen , underwear , household linen and work clothes made of cotton , linen or viscose, traditionally mostly white, today at least mostly light. Darker textile dyes would not withstand the high water temperatures and would rub off. Washing program in the washing machine : normal program with low water level and strong drum movement. Detergent : heavy duty detergent. Classic hot laundry uses a lot of energy; Due to the high performance of modern detergents, washing is usually done at 60 ° C instead. However, the term “hot wash” is mostly retained.

Coloreds however, is a generic term for all brightly colored fabrics that are not kochecht or colorfast, so they can not be washed at 95 ° C such. B. bed linen , nightwear , household linen and work clothes. When washing with the washing machine , the name stands for the same program as the whites, only at a lower temperature. The washing temperature can vary from 30 ° C to 60 ° C, the water level is normal and the drum movements are strong and vigorous.

Easy- care laundry refers to textiles that are easy to wash and do not need to be ironed, or only need to be ironed very little. This includes in particular textiles made of synthetic fibers (nylon, Perlon, polyamide) and specially treated natural fibers (e.g. cotton) and mixed fabrics. The fibers generally absorb less dirt, are easier to wash and return to their original shape when dry, so they do not crease badly. Most washing machines have a special wash cycle for easy-care textiles that takes a little less time than the normal cycle. It is also gentle because the mechanical stress in the corresponding wash program lies between whites / coloreds and delicates. To avoid ironing, the washing machine should not be overcharged.

Wool linen refers to white and brightly colored textiles made of silk and wool , mostly sheep's wool ( new wool ). The white flokato carpets belong here as well as the curtains. Unless hand washing is mandatory, the washing program in the washing machine is selected : Wool with a high water level. The drum movement corresponds to about half of the drum movement from “easy-care” - fine, with any drum movement being completely stopped during the heating phase (automatic soaking phase). Wash temperature cold to 30 ° C. Detergent : special detergent for silk, special detergent for wool, and hair shampoo because of its chemical identity.

Textiles that are subject to special hygienic or cleanliness requirements are traditionally usually produced as white, boil-proof textiles (bed, night, household, table, underwear, etc.). The third meaning of the word "laundry" refers to these textiles:

The word “laundry” no longer means the entirety of all washable textiles, but rather special types of textiles in contrast to other textiles that are not laundry (outerwear, curtains, upholstery covers, etc.).