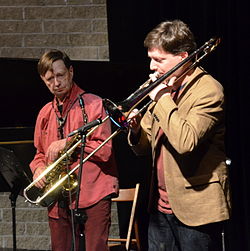 Namysłowski, who learned to play the piano and cello as a child and later studied music theory in Warsaw, made his debut as a jazz musician in 1955 as a pianist with the student band Five Brothers . In 1956 he played in Mieczysław Wadecki's Dixieland band. His other musical stations in the 1950s were the bands Modern Dixielanders , Modern Combo , Polish All Stars and New Orleans Stompers , in which he appeared as a trombonist .

In 1960 he switched to alto saxophone and played in Andrzej Trzaskowski's hard bop group The Jazz Wreckers . He then founded his own band called Jazz Rockers , which Michal Urbaniak also belonged to, and went on tour through Europe. In the mid-1960s he played in the band of the film composer Krzysztof Komeda ( Astigmatic , 1965). He was also active as a musician and composer with the Orchestra of the Polish Radio Jazz Studio.

His music thrives on the influences of Polish folklore as a point of identity and a fallback to Western and American trends, initially hard bop . In his quartet with Joachim Kühn in 1965 he approached free jazz . 1973 was the first time his fusion concept was based on complex radio rhythms. In his band Air Condition he experimented with influences from reggae and pop , with the Zakopane Highlanders he played Polish folklore. In the late 1960s and 1970s, Namysłowski toured the United States, India, Australia, and New Zealand. He also toured Europe with Imre Kőszegi's quartet . In his new project "Dances" he has included dances from different countries and from different times (tango and waltz, Balkan and Polish folk dances, samba and Charleston etc.).

Zbigniew Namysłowski is now one of the well-known and distinguished representatives of contemporary Polish jazz. His record Lola was the first Polish jazz record to be released abroad. His albums Winobranie and Kujaviak Goes Funky were considered by the “ Jazz Forum ” magazine as the best Polish jazz records ever produced. Namysłowski was named best jazz musician in 2006 and his album "Assymetry" was awarded the Polish " Fryderyk Prize" as the best jazz album of the year .