The bill Dahlbusch was a coal - mine in Gelsenkirchen - Rotthausen . The Dahlbusch bomb , an escape capsule , is named after the Dahlbusch colliery .

Share over 100 Thaler in the Dahlbusch mining company from April 1, 1873, front page 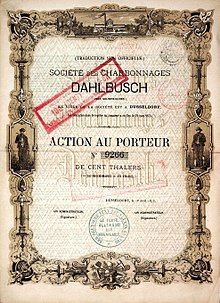 Between 1845 and 1847. unsuspected several trades pit field possession around in the area of Emschermulde the village Rotthausen. In 1847, the German mining assessor Heinrich Thies and a Belgian financial consortium acquired a majority stake in the minefield property and founded the "Anglo-Belgian Society of the Rhenish Mines".

In 1848 work began on sinking the first shaft near the Rotthausen church, which was named "King Leopold" (probably after the Belgian King Leopold I ). Due to financial bottlenecks, the operating company had to liquidate several times. As a result, the sinking work was repeatedly interrupted, so that the final depth could not be reached until 1857. After the original company was converted into the German-Belgian stock corporation SA of the Belgisch-Rheinische Kohlenbergwerke an der Ruhr , the sinking work could finally be continued and the shaft finally started mining in 1860 .

As a result, the development of the edge areas of the mine field began. From 1868 to 1870, shaft 2 was sunk north of Rotthausen. The sinking work was accelerated considerably by using a new kind of shaft drilling method according to Kind and Chaudron . Due to the favorable reservoir conditions , shaft 2 was expanded as an independent conveyor system. The Dahlbusch settlement developed around it as a factory settlement.

In 1873 the old operating company was liquidated again because it could not raise the necessary financial resources for the further economic development of the two pits. The Dahlbusch mining company was re-established as the successor company . From then on, the entire mine operated under this name.

1874-1877 was in the southern part of the field on the road to Kray the double pit 3/4 sunk. This was equipped with two Malakow towers and also functioned as an independent conveyor system. From now on, the funding developed steadily. In 1881 the Dahlbusch colliery was the largest mining facility in the Ruhr area with an annual output of 877,000 tons, despite the relatively small mine field.

In 1890, Dahlbusch AG and other mine operating companies founded the Rheinisch-Westfälische Kohlensyndikat (RWKS) to represent interests. From 1890 to 1895, shaft 2 received a new production shaft with shaft 5. From 1896 to 1899, shaft 6 was sunk on shaft 3/4 as a new, modern production shaft. After its completion, in 1900 the Malakow tower above shaft 4 was replaced by a two-storey Tomson trestle so that it could be used as a cable car and material shaft.

In 1900, a coking plant was put into operation on both Dahlbusch 2/5 and Dahlbusch 3/4/6 . Between 1912 and 1914, Shaft 7 or Shaft Berger was sunk next to the centrally located shaft 1 to improve weather management . Finally, from 1914 to 1916, the new shaft 8 was sunk on shaft 2/5, which was equipped with a large double strut frame, as it was intended as a central shaft for a long time.

The production peaked at 1.2 million tons annually. In order to improve coal and coke sales, Dahlbusch AG was one of the founders and shareholders of several large successor companies, such as DELOG AG for glass production , Ruhrchemie in Oberhausen and a few others.

Extensive rationalization measures were carried out during the world economic crisis . Between 1927 and 1934, shafts 1 to 5 were abandoned and backfilled, as operating only with the three shafts 6, 7 and 8 made economic sense for the relatively small mine field. In 1936, part of the mine field of the neighboring disused Hibernia colliery and its shaft 1 were leased as an outdoor facility and continued to be operated.

In 1944, shaft 8 was temporarily canceled for mining due to a bomb hit in the machine center. Schacht 6 took over temporarily the promotion .

In the 1950s, the colliery increasingly had to contend with the risk of firedamp. On May 20, 1950, a severe firedamp explosion occurred in the Westfeld (shaft 6, 7th level) with 78 deaths. Six survivors came with severe burns, some of them third degree, to what was then the Knappschaft's hospital in Gelsenkirchen-Ückendorf. The most seriously injured was Heinz Otto Engelhardt (1923–1997), he was visited by the then Minister of Labor. The central memorial service took place on May 25, 1950 on the Zechenplatz in front of the Unglücksschacht 6, Federal President Theodor Heuss gave the funeral speech, then he accompanied the long funeral procession through the crowded streets of Gelsenkirchen-Rotthausen to the cemetery. The community grave that was laid out at that time with a large bronze monument made up of four larger-than-life miners on a grave slab is still there. The incident had a parliamentary aftermath; In 1950 a committee of inquiry in the German Bundestag dealt with the mine accident.

On May 7, 1955, three miners were trapped underground when a blind shaft broke. After four days, on May 12, 1955 , they were rescued through the first use of a new, self-developed rescue device , the Dahlbusch bomb named after this mine . On August 3, 1955, another firedamp explosion occurred in the “Hibernia” part of the field, which caused a mine fire . 42 miners fell victim to this accident.

From 1958 onwards, mining, ropeway travel and power generation were combined in shaft 8. In 1961 the “Hibernia” part of the field was given up. Hibernia 1 shaft has been filled .

In 1964, Dahlbusch AG registered the Dahlbusch colliery for closure, as the remaining coal reserves could no longer be extracted economically and the small mine field did not allow any further expansion.

On March 31, 1966, the last conveyor shift was run on Dahlbusch 8 and the mine was subsequently shut down. In the following years the shafts were filled and the daytime facilities were almost completely demolished.

The shares of the company, renamed Dahlbusch AG , were listed on the stock exchange until March 2019.