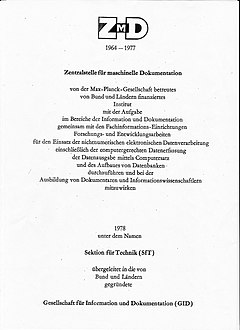 A historical description of the ZMD institute from 1977

The Central Office for Machine Documentation ( ZMD ) was an institute in which, in addition to basic and applied research, development and service work in the area of ​​information and documentation was carried out using electronic data processing . The ZMD was based in Frankfurt am Main and existed from 1964 to 1977.

The central office for machine documentation in the Niederrad office district, 1970

The building of the former central office for machine documentation, 2016

The central office was a branch of the Institute for Documentation (IDW). It was founded in 1964 and had its first seat in Frankfurt am Main am Holzhausenpark in rented office space. In 1969, the ZMD and the Institute for Documentation (IDW) moved into a newly built, own building in the Niederrad office district . - In 1977 the institute was transferred to the section for technology of the Society for Information and Documentation (GID), which was newly established in the same year. The ZMD was in the area of ​​responsibility of the Federal Ministry for Research and Technology (BMFT) - today the Federal Ministry of Education and Research (BMBF) -, was financed by funds from the federal government and the federal states and was supported by Minerva GmbH, a subsidiary of the Max Planck Society ( MPG). - The director of the ZMD was Klaus Schneider.

The task of the institute was to carry out development and research work in the area of ​​information and documentation using non-numerical electronic data processing (EDP) and to set up databases . In addition, programs for the computer set developed in the training of documentalists and information scientists participated. - Assistance, expert work and participation in advisory committees, for example in connection with automation projects, especially for newly founded libraries; see ref. G. Pflug