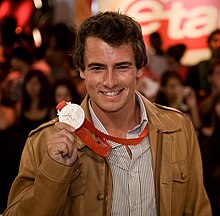 Adam van Koeverden (born January 29, 1982 in Oakville ) is a Canadian politician ( Liberal Party ) and former single kayak driver who competed in shallow water over the 500 and 1000 meter distances. He won gold at the 2004 Summer Olympics in Athens on the 500-meter course and bronze over the 1000 meters. At the 2008 Summer Olympics in Beijing , he was the flag bearer for the Canadian team at the opening ceremony.

At the 2007 Canoe Racing World Championships in Duisburg , Adam van Koeverden won the 500-meter title in 1: 36.279 minutes. He was also runner-up in the 1000 meter world championship. Van Koeverden takes part in the 2008 Summer Olympics in Beijing and was allowed to carry the Canadian flag at the opening ceremony. He started in the Olympic rowing and canoeing park Shunyi over both distances, over the short distance he won the silver medal, in the 1000 meter distance he finished eighth. At the 2009 World Championships in Dartmouth , Canada , he finished 3rd in the kayak one.

In the election in 2019 van Koeverden appeared in the south of Ontario located constituency Milton for the Liberal Party of. He defeated the previous incumbent Lisa Raitt of the Conservative Party with 51.7 percent of the vote and thus moved into the Canadian lower house .