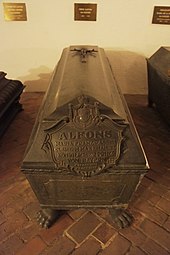 Sarcophagus of Alfonso of Bavaria in the Wittelsbach crypt of St. Michael in Munich

Alfons Maria Franz Clemens Maximilian of Bavaria (born January 24, 1862 in Munich ; † January 8, 1933 there ) was a royal prince and general of the cavalry .

Alfons came from the noble Wittelsbach family . He was the son of Prince Adalbert of Bavaria and his wife Infanta Amalia del Pilar of Spain and a grandson of King Ludwig I.

After attending a humanistic grammar school and university, he joined the 1st Infantry Regiment "König" of the Bavarian Army in 1880 as a secondary lieutenant . In the following year he was assigned to the 3rd field artillery regiment "Queen Mother" and in 1882 he was transferred to the 1st heavy rider regiment "Prince Karl of Bavaria" . Promoted to Rittmeister in 1884 , Alfons served as squadron chief from 1886 and took part in courses at the War Academy (training trip, war history) in 1888/89 and 1891/92 . While still a major , he was appointed regimental commander on July 15, 1892. In this position he rose further and finally took command of the 1st Cavalry Brigade as major general in 1899 . Promoted to lieutenant general in 1901 , Alfons was relieved of his command. In 1905 he was promoted to general of the cavalry.

He was chief of the Dragoon Regiment "Freiherr von Manteuffel" (Rheinisches) No. 5 stationed in Hofgeismar .

Alfons is buried in the Michaelskirche in Munich.

Alfons had only asked for the hand of Louise Victoire's cousin Marie Valerie of Austria . But the first meeting was so boring that there was no wedding.

On April 15, 1891, Alfons married Louise Victoire d'Orléans , the daughter of Ferdinand d'Orléans and Sophie Charlotte, Duchess in Bavaria at Nymphenburg Palace . The following children were born from the marriage: