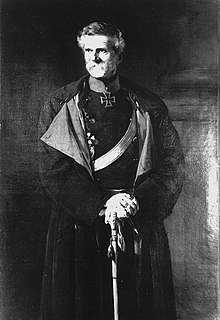 The first head of the regiment and later namesake, Field Marshal von Manteuffel

The Dragoon Regiment "Freiherr von Manteuffel" (Rhenish) No. 5 was a cavalry joined the Prussian army .

The association was established on May 7, 1860 (Foundation Day) by AKO as the 1st combined dragoons regiment from the 5th squadron of hussar regiments No. 7 , 9 and 11 and the 4th squadron of hussar regiment No. 8 . The peace garrisons were designated for the staff, the 1st and 2nd squadrons Salzwedel , and for the 3rd and 4th squadrons Gardelegen . From July 4, 1860, the association led the designation Rheinisches Dragoon Regiment (No. 5). The bracket dropped on May 7, 1861. At the end of 1864, the regiment moved to Flensburg and Hadersleben . After the German War, the association then moved into its garrison in Frankfurt am Main and Mainz at the end of 1866 . Since September 27, 1875, the association was completely stationed in Hofgeismar .

By AKO on January 27, 1889, the regiment was given its final designation of Dragoon Regiment "Freiherr von Manteuffel" (Rheinisches) No. 5 . 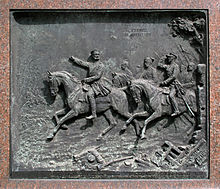 Colonel Wright (first from right) on August 31, 1870 during the "pursuit of the enemy over Frenois on Sedan" on a relief of the Prince Albrecht monument

During the German War , the Dragoons were involved in fighting in the Hanover area and in the Battle of Langensalza . Then the association came to the Main Army under General Manteuffel . Here the regiment took part in the advance on Fulda and in battles against Bavarian troops . In July, the advance via Frankfurt am Main into the Odenwald followed with fighting on the Tauber . The last fighting took place near Würzburg on August 2nd .

At the beginning of the war against France in 1870, the regiment was initially used in the border guard in the Palatinate . This was followed by participation in the Battle of Sedan with a subsequent advance on Paris . Then the Dragoons took part in battles against the French Loire Army. In January 1871 the regiment returned to the home garrisons.

At the beginning of the First World War , the regiment marched west in August 1914, where there were occasional border skirmishes, and patrol and security services followed in East Belgium by the end of March 1915 . Then the dragoons were moved to the Eastern Front . Used there in the war of movement in Lithuania and Courland , the regiment took part in the Battle of Vilna in September 1915. This was followed by position battles in Russian Poland and Galicia until autumn 1916. Participation in the campaign against Romania followed by February 1917 . Then it was relocated to the west again and received border protection tasks on the Dutch border. At the end of the year the dragoons were trained as infantry and used to carry out stage services in the area of ​​the Siegfried Line in France. Then it was relocated to the east again. It stood together with the Hussar Regiment No. 14 as the Prussian Rifle Regiment in infantry combat operations. In June 1918 the regiment was made mounted again and undertook security tasks in the Ukraine until the end of the war .

After the Armistice of Compiègne , the regiment marched back with constant fighting and arrived on February 28, 1919 in Hofgeismar. This was followed by the demobilization and dissolution of the association.

The tradition took over in the Reichswehr by decree of the Chief of the Army Command General of the Infantry Hans von Seeckt from August 24th 1921 the 2nd Squadron of the 16th Cavalry Regiment in Hofgeismar.

The dragoons wore a cornflower blue tunic and charcoal gray trousers. The tunic was equipped with Swedish lapels.

The so-called badge color of the regiment was ponceau red. The cuffs, the stand-up collar, the epaulette fields and passers-by were of this color. The buttons and fittings were made of tombac. A white bandolier with a black cartridge ran from the left shoulder to the right hip . The bandolier and cartridge were not worn with the evening suit and formal suit. The helmet was decorated with the Prussian dragoon eagle and scale chains. The national cockade was black and white, as was the team's lance flag. The non-commissioned officers' lance flag was white with a black Prussian eagle.

Already ordered by AKO on February 14, 1907 and introduced gradually from 1909/10, the colorful uniform was replaced for the first time by the field-gray field service uniform (M 1910) on the occasion of the imperial maneuver in 1913. The leather gear and the boots were natural brown, the helmet was covered by a fabric cover called reed-colored. The bandolier and the cartridge were no longer applied to this uniform.