Alkamenes ( ancient Greek Ἀλκαμένης , Latinized Alcamenes, † around 400 BC) was a Greek sculptor of the 5th century BC. And one of the most important students of Pheidias . He created exclusively cult statues and was already counted among the most important sculptors in ancient times , most of the works he created for his hometown Athens . His most famous sculptures include the corner sculptures at the Temple of Zeus in Olympia , his statue of Ares and Aphrodite in the gardens .

Little is known about the life and creative period of Alkamenes. Both Athens and the island of Lemnos are given as origin in the traditional sources . Since Lemnos has been around since the middle of the 5th century BC. He was found to be an Athenian clergy , possibly an Athenian citizen born in Lemnos. He was a student of the sculptor Pheidias and later became his greatest competitor as well as his favorite student Agorakritos . Like Agorakritos, he was close to the work of the Athenian statesman Pericles . Alkamenes created exclusively cult statues, which he implemented in marble, bronze and chryselephantin (with gold and ivory), and because of his marble statues he is also explicitly named as a marble artist in contrast to important bronze sculptors.

There are different statements about his creative time: While he was already active in the 83rd  Olympiad (448–445 BC) with Pliny , he was still 403 BC after Pausanias . Active for Thebes . It is certain that his main creative period falls during the Peloponnesian War (431–404 BC), during which he received several official orders for cult statues of the newly built temples in Athens and, as evidenced by several pond reliefs, also private orders. For the limitation of his creative time, the information of Pausanias was problematic, according to which he had the sculptures of the west gable of 456 BC. The Temple of Zeus in Olympia, completed in 403 BC. A relief group of Athena and Herakles in Thebes, which was built in BC , is said to have been created, which will not have been possible due to the age difference. Based on this information, it was assumed that another artist of the same name was active in Olympia. Due to the different marble of the corner figures of the west pediment, it is now considered certain that Alkamenes either created them as a replacement for the originally attached and destroyed figures or that the west pediment remained unfinished and was completed by him.

Only a fragment of a group with Prokne and Itys has survived in the original from the work of Alkamenes . Works of the Alkamens attested to in the literature have repeatedly been associated with copies and derivations, with only a few works being regarded as confirmed copies of statues by the Alkamen.

Figures of the left gable corner

The pediment on the west pediment of the Temple of Zeus shows the Centauromachy , the battle of the Lapiths against the Centaurs , which broke out in myth during the wedding of the Lapith king Peirithoos . In the middle of the group of sculptures is the Apollo of Olympia , around him the gable field is filled with battle groups. In each corner there are two women crouched together, anxiously watching the battle; they differ significantly from the rest of the group in terms of both material and design. The gable was created by a sculptor known under the emergency name “ Olympic Master ”, it is unclear whether the corner figures were not completed and later supplemented or destroyed and recreated by an earthquake. 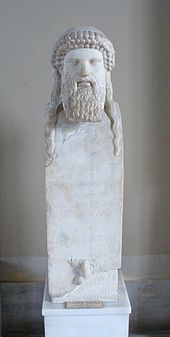 Replica of Hermes Propylaos from Pergamon

The so-called Hermes Propylaos is a between 448 and 442 BC. Resulting Chr. Herme the god Hermes in archaisierendem style that appeal to the Propylaea of the Acropolis in Athens was. Pausanias attributed the authorship of the Herme to the philosopher Socrates (son of the sculptor Sophroniskos ), who is said to have created the relief of the Charites next to the Herme . Through epigrams on two Roman replicas from the 2nd century found in Pergamon and Ephesus , it can be clearly attributed to the work of Alkamenes. While the replica from Ephesus differs stylistically significantly from the original, the copy from Pergamon clearly indicates the original figure of the Herme.

Group with Prokne and Itys

The group of statues of Prokne with her son Itys was in the Athenian Acropolis between the Parthenon and the Erechtheion . Stylistically it is close to the west gable of the Parthenon, the corresponding head is a later addition. Pausanias only mentions the group as a consecration gift from Alkamenes, but today it is considered to have been created by him and is considered to be the only original work he has preserved.

Aphrodite in the gardens

Pliny reports of a competition between Alkamenes and Agorakritos for the best statue of Aphrodite. When Alkamenes was able to win this competition, Agorakritos dedicated his statue to the nemesis and sold it to Rhamnous . It is unclear whether the statue of Alkamenes mentioned in literature can be identified with Aphrodite in the gardens .

The Hecate Epipyrgidia is the first three-figure representation of the goddess Hecate around a cult pillar ( Hecateion ). The work, executed in archaic style, was on the Pyrgos of the Athena Nike Temple on the Athens Acropolis. Representations of Hecate Epipyrgidia can be found on Athenian coins, ultimately all Hecateia can be regarded as a derivative of this, even if they are executed very differently in detail.

The statue of Ares was a cult statue in the Ares Temple at the Athens Agora . Ares representations such as the Ares Borghese in the Louvre in Paris are traced back to this statue . Whether this is rightly done is a matter of dispute.

Group with Hephaestus and Athena

The group with Hephaestus and Athena was a bronze group that was located in the Hephaistion , the temple of the god Hephaestus , at the Athens agora. They were created around 421–415 BC. BC and were placed on marble bases that could be found during excavations. Alkmenes authorship of the statue of Athens is probable, but not proven. Hephaestus was depicted as a limping god, the statue of Athena had inlaid blue eyes and a pewter flower was placed under her shield. At the base itself the birth of Erichthonios was depicted, who in the myth had been entrusted by his mother Gaia to Athena and was considered to be the founder of Panathenaia . Numerous fragments of Roman copies have been brought into connection with the statue of Athens, depictions of the statue can be found on Roman coins from Athens as well as on several lamp reliefs.

The statue of Dionysus Eleuthereus was an archaic seated statue made of gold and ivory that was made between 420 and 410 BC. Was created. It was located in the Temple of Dionysus of the Dionysus Theater on the southeast slope of the Athens Acropolis. Based on the foundations of the bases that have been preserved, it was possible to calculate that the statue must have been between 5.5 and 6.25 meters high.

Group with Athena and Heracles

Alkamenes designed for Thebes 403 BC. A large relief group of Athena and Herakles, which was in the Herakles temple there. The group was a consecration gift from the Athenian general Thrasybulus in gratitude for having been helped by Thebes in disempowering the thirty tyrants . Among the works of Alkamenes, the group is the youngest datable creation and documents its work up to the year 403 BC. Chr.

The statue of Hera was a cult statue in a temple of Hera between Athens and Phaleron , which, according to Pausanias, was destroyed during the Persian Wars . Replicas of the statue have been suspected in isolated cases, but have not yet been proven.

The sculpture named by Pliny Encrinomenos ( ἐγκρινόμενος , "the one among the number (of athletes)") was a victorious statue of a pentathlete . According to Pliny, of whom this statue is only known, it was made of marble, but gives no information about its location.