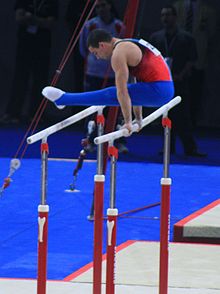 The parallel bars are sports equipment from gymnastics , which is also known as men’s bars or parallel bars . It consists of two parallel bars, each 350 cm long and 195 cm high (typically: adjustable in steps from 160 to 210 cm) on four standpipes. The cross-section of the somewhat highly oval spars are made out of wood over a core of formerly spring steel, but today of up to three rods made of fiberglass in order to achieve sufficient strength and break resistance as well as suitable elasticity and damping. The horizontal distance between the spars can be varied from about 41 to 61 cm using projections called goosenecks .

Under the bars there are usually 20 cm thick jumping mats .

The bar was invented by Friedrich Ludwig Jahn .

A bar that can be moved with a chassis that can be latched in the middle weighs around 300 kg. The low chassis made of (originally) cast iron in conjunction with extending legs and rubber feet allows even stronger forces introduced horizontally across the bars to be absorbed without tilting the device.

The freestyle exercises on the parallel bars are dominated by swing and flight elements. Power parts are allowed but not required. In addition, the gymnasts must not stop the movement more than three times during their entire exercise.

Lately there has been a rapid development push for "gymnastics in every direction", especially on parallel bars. Not only along the "Holm alley", but also transversely with reck like giant wheels, with flight parts and screws combinations or with the pommel horse abgeschauten flanks gymnastics on the parallel bars today.

In competitions women do gymnastics on the uneven bars .